This past March, there was no college basketball.

I’m not trying to bring that back up to rub salt in the wounds, just to set a scene.

Because ESPN’s response to the lack of basketball was to replace it with everyone’s favorite thing. Polls! Everyone, give me a hip hip hooray for polls!

My issue with ESPN’s college basketball player bracket, though, hinges not on the fact that they took advantage of a bad situation to get some combination of interaction and opinion from their fanbase (in fact it would be quite hypocritical for me to be, considering that’s exactly what I later did), but instead on how badly they did it.

They forgot the biggest problem with polls. People are stupid.

I thought that they’d proven that better than they possibly could when Kareem Abdul-Jabbar – almost unanimously the best college basketball player in history according to pundits and historians alike – was eliminated by Shaquille O’Neal before the names had even been narrowed down.

But then Michael Jordan won.

I’m sorry, but no one in their right mind thinks Michael Jordan is the best college basketball player ever. There’s a much better (but also incorrect) argument that Jordan was never even the best player on his team in college than there is in favor of him being the best ever.

So I decided to embrace my narcissistic side and convince myself I could do it better. Over about a month-long period, I conducted NCAA Basketball GOAT polls of my own, with 64 of the greatest college players, facing off against each other in a March Madness format, but with a twist.

The twist is that every single poll was to be a blind poll, where you wouldn’t know who each contestant is until they were eliminated, à la The Masked Singer. That way, there wouldn’t be the impact of preconceived notions about players thanks to their NBA careers or how much people personally like/dislike them.

That much was proven almost immediately when Michael Jordan was upset by Kevin Durant in the Round of 64.

Durant and Williamson advancing past the first round was an early indicator that one-and-done players could be taken seriously to an extent in GOAT conversations if they were good enough in the short time they play for their school.

Abdul-Jabbar, Larry Bird, and David Thompson stood out from the beginning as obvious contenders out of the West Region, and as such it was no real surprise when they all breezed into the Sweet Sixteen.

Abdul-Jabbar beat Michigan’s Cazzie Russell unanimously in the Sweet Sixteen, and Thompson didn’t challenge Bird much when they met up either.

Unsurprisingly, Abdul-Jabbar didn’t experience many challenges on his route to the Final Four, and even Bird only won 17% of the vote against him.

The Midwest Region was almost devoid of surprises early on, with only two upsets – Allen Iverson over Doug McDermott and Adrian Dantley over Sam Perkins – in the first round.

That quickly changed in the Round of 32 with Elgin Baylor pulling out a close upset over Bill Walton by a 59%-41% vote. As Walton was both a 1 seed and an early favorite to make to Final Four, this was quite a bit of a shock, and Baylor joined Glenn Robinson (who had upset Shaquille O’Neal in a very close race), Tim Duncan, and Oscar Robertson in the Midwest’s Sweet Sixteen round.

Baylor made quick work of Robinson but fell short in the Elite Eight to Oscar Robertson, whose dominant collegiate career made him the easy favorite in each matchup, in unanimous fashion.

Baylor had been one of two Elite Eight participants to hail from a non-Power Five school. Robertson set himself up for a Final Four matchup against Abdul-Jabbar after qualifying out of the region.

The South Region was spearheaded by a long list of some of the NCAA’s top stars: Christian Laettner, Ralph Sampson, Jerry Lucas, Bill Russell…

Since neither Laettner or Sampson had statistical résumés that could quite live up to their reputations, this seemed like the likeliest region to see some madness.

That was far from the case in the first round, with Wayman Tisdale‘s upset of Grant Hill the lone unexpected result in the Round of 64. The next round would be strikingly different though.

Bill Russell and Wilt Chamberlain beating Jerry Lucas and Tom Gola, respectively, could perhaps be characterized as only minor upsets, but Tisdale defeating Sampson and Issel pulling off a close win over Laettner are a different story.

When it came down to it though, neither Issel nor Tisdale could pose a threat to the two giants of 1960s basketball, and Russell and Chamberlain came to clash in the most poetic matchup yet.

Russell took the third Final Four slot, and the only one outside of a top two seed.

The East Region turned out to be a complete and utter mess, there’s no easy way to put it.

Meanwhile, David Robinson and Danny Manning each fell in the second round, and Pete Maravich just barely escaped Elvin Hayes.

But Maravich bounced back in the Sweet Sixteen, eliminating Carmelo Anthony and setting himself up for an Elite Eight battle against the biggest underdog in the competition.

Maravich was able to pull it off in the end, beating Lanier 57%-43%, ending Lanier’s run and securing his own spot in the Final Four.

The matchup between radical defensive stardom and radical offensive stardom – Maravich vs. Russell – was close, but Russell’s two NCAA Titles compared to LSU’s failure to even make the tournament during Maravich’s tenure sent Maravich packing.

On the other side of the bracket, the fight for the other spot in the Final was along a similar vein: a battle between the best winner and the best stat-sheet stuffer in college basketball history.

On this particular occasion, the stat-sheet proved more important. Robertson defeated Abdul-Jabbar 65%-35%, eliminating the clear-cut favorite to win it all right before the final phase of the tournament.

So it came down to two: Oscar Robertson and Bill Russell. Two of the biggest stars of the NBA’s Vintage Era.

Robertson won the NCAA scoring title all three years of his college career – something only he and Maravich have accomplished – with a career scoring average of 33.8 points per game. He broke the all-time NCAA scoring record, as well as 13 other records, and retains the second-highest points per game in college history. He also averaged 15.2 rebounds and 7.1 assists on 53.5% shooting from the field and 78.0% from the line, but he never became a national champion, something that was rubbed in even further when Cincinnati won it all back-to-back as soon as he graduated.

Russell, just as he would be in the NBA, was the consummate winner in college. He led San Francisco to their only two titles as he quickly developed into basketball’s greatest defender and athlete. His athleticism was such that he was a consensus top-10 high jumper in the world and would have been one of the favorites to earn a medal in high jump in the 1956 Olympic Games if it weren’t for rules banning athletes from competing in multiple sports during the Olympics at the time. His defense was reputable enough that John Wooden referred to him as “the greatest defensive man I’ve ever seen.” Despite a very raw offensive game, Russell averaged 20.7 points and 20.3 rebounds on 51.6% shooting through three years.

Robertson won the championship matchup with 54.2% of the vote.

Which means Oscar Robertson is The Scorecrow’s new pet GOAT. 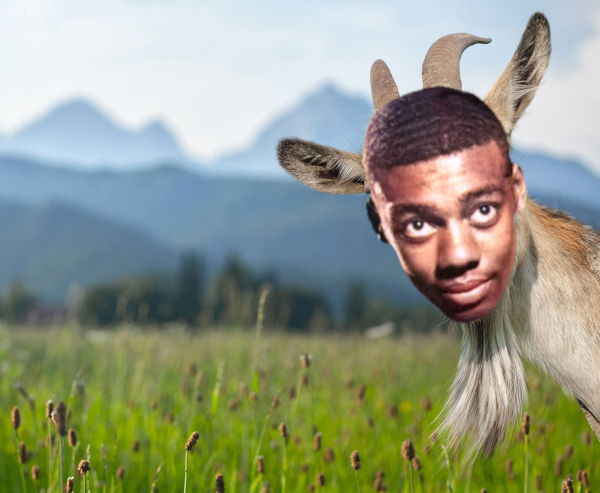 Hit us up on the Socials: