The Denver Broncos have named second-round pick Drew Lock as the team’s starting quarterback this week against the Los Angeles Chargers, per ESPN’s NFL insider Adam Schefter. The Drew Lock era is finally upon us, and given how the season has gone, it’s not surprising. I know that Broncos fans are stoked for the rookie’s first career start, but let’s be reasonable with expectations with him.

The Broncos have had mediocre at best quarterback play all season. Granted, it has been better than previous seasons in terms of just how we feel. Joe Flacco got bashed for being precisely what we knew he’d be. An average quarterback that can manage the game and hopefully play good enough to win. A neck injury ended his season by going on injured reserve

Brandon Allen has shown to be exactly average too. In his three starts, he ended with a record of 1-2. His first three starts were all just ok. He put up a good showing against the Cleveland Browns in which he would only throw for 193 yards but brought more juice to the team than Flacco ever did, which led to his only win. The next game against the Minnesota Vikings showed that he is a capable NFL quarterback. However, his ceiling seems to be a viable backup quarterback with spot start ability. Wouldn’t go much past that, though.

Now we land on Drew Lock – the third starting quarterback of the season. If it weren’t for an unfortunate injury to his thumb during the preseason that landed him on injured reserve, Lock likely would have been the backup to Flacco. All the “hot takes” fans and media have been saying don’t matter anymore, it’s just time to watch and see what we’ve got in him.

As for what to expect with Lock, I would say that it shouldn’t be much different than what we saw with Brandon Allen. From what we’ve seen from both quarterbacks, they both seem to have a similar skill set, but Lock shows much more promise and ability at those skills. Basically, that’s the long-winded version of, we’re going to see a lot of what we saw with Allen the last three weeks. Quick throws to get the ball out of his hands, bootlegs to get Lock out of the pocket, and a lot of running plays with Phillip Lindsay and Royce Freeman. This is going to be the ultimate “get the ball in the hands of your playmakers” type game. Along with the running back duo, I’d expect a big game from Courtland Sutton and Noah Fant, who’s been hitting his stride of late.

With Lock spending most of his college career in the shotgun, I’d expect offensive coordinator Rich Scangarello to have lots of shotgun sets so Lock can get comfortable early on. He’s been working under center a ton over training camp and in the last three weeks of practice, which should help him in certain big formations, especially around the goal line.

As for the “hot take” addicted fans and media, you’re going to need to take a backseat on Lock. At the end of the day, he’s a rookie, and that comes with mistakes. Obviously, the hope is that he can be the franchise quarterback and be around for the next 5-10 years, but that’s going to come with some missteps and mistakes. We have to be willing to understand that he’s going to make some bad reads and bad throws. Know that his progression includes that. He’s got a lot of talent and just needs to polish off his footwork and reads a little bit.

I’m not going to make any stat line predictions, and I’m not going to make statistical predictions for him over the next five weeks. I don’t care about the wins or losses either. What we saw in four preseason games was progression. We saw him get better with his mechanics and decision making. Having pocket awareness, knowing when to use his athleticism to either run or make a throw outside the pocket. As far as I’m concerned, my only expectation for him is that he shows progress. I need to see him make good, quick decisions in the pocket, accurate throws, and leadership. He doesn’t need to be a franchise quarterback overnight, but we do need to see some of those qualities shine through.

It would take five spectacularly bad performances to say that Lock is a bust. Five games aren’t enough to honestly tell if Lock is truly going to be a bust or a hit, but I’m equally excited.
I’ll be at the game tomorrow, and I’d expect the atmosphere to be electric. The roar of the crowd to be near deafening when Lock gets announced as the starting quarterback. It’s going to be fun to see Denver’s best chance at a franchise quarterback since Peyton Manning in person. Be sure to check back here after the game to get my reactions to Drew Lock’s inaugural start in the NFL. 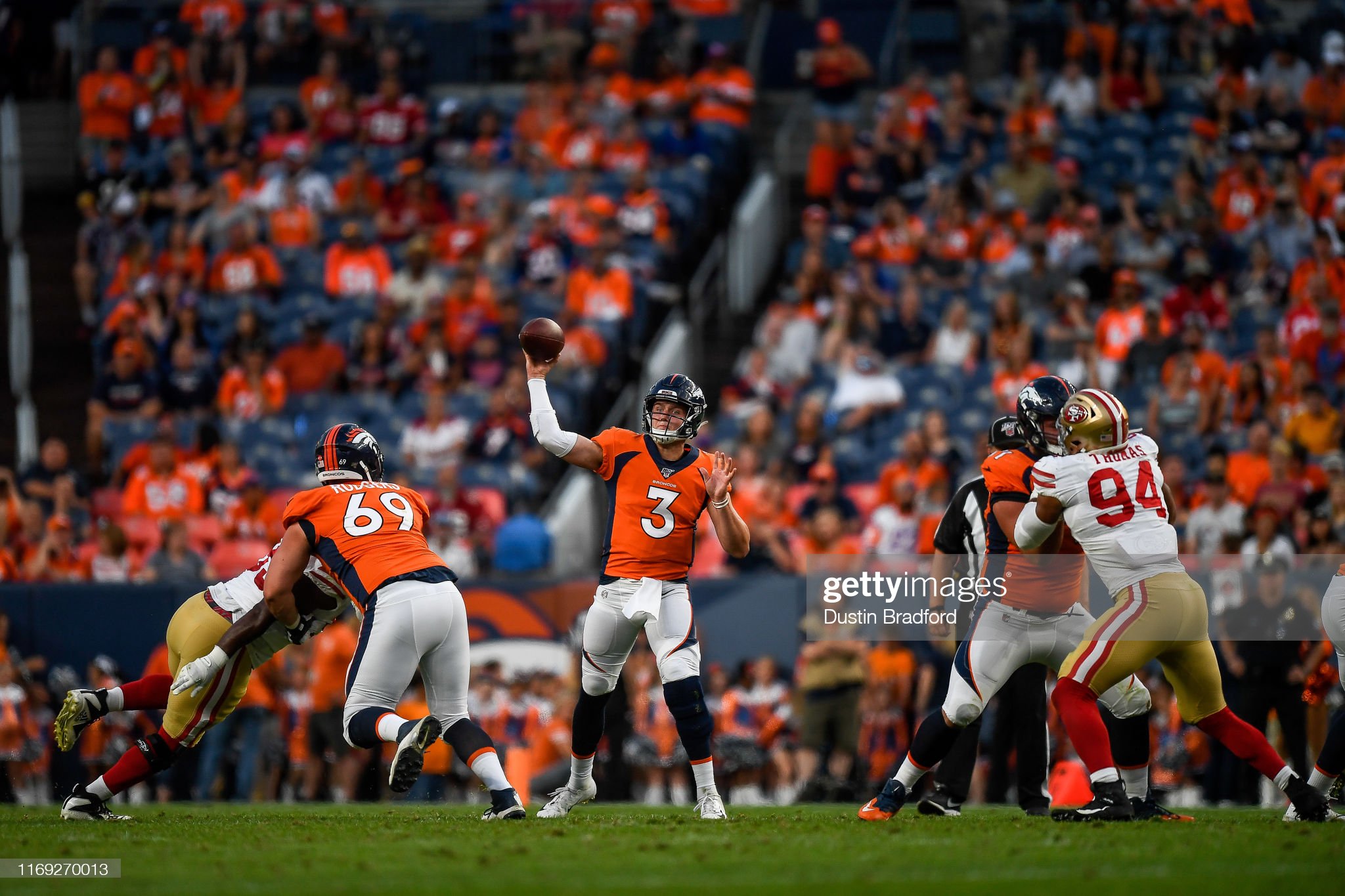