The first week of the NFL season is in the books and we have had time to reflect on how that has affected our account balances on our DFS sites. While results are nice at times to analyze, we really want to make sure the process to get there is correct moving forward. We all ultimately are trying to learn and get better as the season progresses. I want to touch on the plays I spoke about prior to this week and talk about what I did right and wrong.

I will briefly talk about each player and stack and go in-depth on any glaring mistake I believe I made.

My main three stacks all bricked off hard. Carolina was decent in general, but it was mostly Christian McCaffrey carrying that team. Cam Newton didn’t throw any touchdowns. D.J. Moore didn’t do a ton. On the other side of that game, all the production is spread out and didn’t help anybody go off. Jameis Winston was pretty bad at all times, and Tampa Bay was just sad in general. Minnesota failed, but only because Atlanta showed no resistance at all, leading Cousins to throw a whopping 10 pass attempts.

When you get the game script wrong, or at least mostly wrong, bad things are going to happen. The thinking behind Minnesota made a ton of sense for tournaments, especially since Dalvin Cook was chalk, but Atlanta needed to make the game close to keep Cousins throwing, and that just did not happen at all. I was admittedly a little blinded by the Tampa love, and it’s something I will remember vividly moving forward.

Newton and Cousins, I spoke about in stacks, but we can talk about Baker. Some weeks, Cleveland is going to do Cleveland things. The passing game vanished, the run game never got going, and the Browns slowly slipped further away from the Titans. In theory, this should have helped our Baker stacks, with them having to throw the ball to stay in the game, but sometimes that just doesn’t work out in your favor. Look at what happened to the Steelers on Sunday night. We can’t do anything about a team rolling over and dying on the field, so I take the loss on buying into the Browns hype.

Fournette and Johnson were two of my highest-owned backs, and they got me killed a lot this week. Detroit did everything I expected in the passing game but had no run game to speak of. I can’t tell yet if that is a reflection of Johnson’s usage in this offense or just a bad game on the ground in general. The Jaguars saw Nick Foles go down, and while they were able to keep up a bit in the first half, the Chiefs pulled away quickly enough that Fournette’s carries were few and far between for the second half of the game. He isn’t terribly involved in the passing game, so he was a failure for us this week.

My biggest mistake (as far as looking at results) was my under-exposure to Ekeler, who caught several passes and scored multiple touchdowns. That may be a results-oriented look, but Ekeler saw 75% of the snaps, so we can expect his involvement, in general, to be similar in the future.

Atlanta, as I mentioned before, failed to make the game close, and Julio suffered as a result. His only target in the second half was converted to a short touchdown, but he still was nowhere near hitting value. Marvin Jones was the odd-man-out in the passing game in Detroit, Tyreek got injured early, and Lockett caught one whole pass for a touchdown.

While these were losses in our lineups, consider that the Chiefs took the gas off the passing game before Kelce could get in the box (and Patrick Mahomes missed him going for a no-look pass), and Kittle had two touchdowns nullified by holding penalties. No real issue with playing these guys here.

Mahomes, even though they were at Jacksonville, did not disappoint. The main problem with playing him was that they scored mostly rushing touchdowns in the second half and Sammy Watkins ended up with all the volume. This is an example of the correct process, but not being reflected in the results. My best single entry lineup actually had Mahomes, Watkins, and Kelce.

Stafford did about as well as I expected, but Danny Amendola and T.J. Hockensen were way more involved than I would have initially thought. Again, the process was right, but results do not reflect it. Rivers was solid, but since I was not high enough on Ekeler, it didn’t really pan out for me. Kyler Murray and Jacoby Brissett were okay – they didn’t kill you, but they didn’t make you much money either.

I will not spend time talking up Cook and CMC, they were obvious plays and they crushed their matchups. Carson was more involved in the passing game, and that really saved his stat line at the end of the day. That is not something I expect to continue as much going forward.

Mack was a big hit at low ownership, and that is one of the better-looking spots for the week. His score was great, but due to many mispricings and performances, this fell by the wayside because you did not need him to win a tournament.

Golladay didn’t go off on Sunday, but he did enough that he was serviceable in your lineups. Boyd was chalky, and his lack of getting in the box is the only thing that hurt him. He was targeted plenty, but it was randomly John Ross‘ day.

Some other players didn’t exactly go right but didn’t go wrong either. Chris Godwin was mega-chalk, so if you played him in cash, he didn’t hurt you. He was in my Tampa stacks, so they were doomed to fail already.

While I got the Ekeler fade wrong, I got the Samuel fade right. He was barely targeted, even though the game script favored the passing attack for Carolina. I did play Samuel in my 150 lineups, but I was well under-exposed.

I was very high on Engram this week, and he did not disappoint. This may be my best call of the week, honestly. His market share will only go up if Sterling Shepard misses any more time, as that receiving corps is decimated by injury and suspension. Delanie Walker caught fire late in that game as the Browns fell about. Andrews caught a garbage touchdown from Robert Griffin III, of all people. I wouldn’t call Andrews a hard win this week, but we didn’t get to see if Lamar Jackson likes him as a safety valve, since he was never in danger.

I want to briefly touch on two on my lineups – my best single-entry lineup, and my best lineup in my 150 for MME.

First, my single-entry in the $12 Fair Catch. 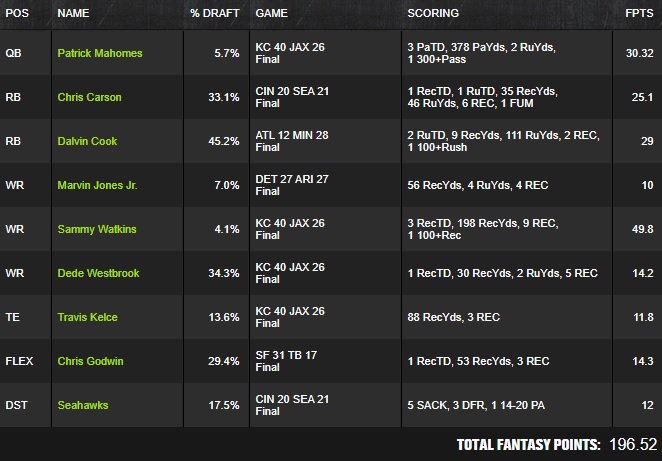 As I said before, my best single-entry lineup contained Mahomes, Watkins, and Kelce, as well as bringing back Dede Westbrook from the Jaguars. Obviously, Watkins is the bright spot here, but the production was pretty centralized on him there, so Kelce only ended up with 11.8. If the Jaguars keep up a little longer, maybe Dede can pick up a few more catches and Mahomes has to throw the ball a little more. It’s hard to complain about a 30 point performance, but we could have done better here.

I filled out the rest of my lineup with Carson, Cook, Jones, and Godwin – all players that I wrote up. Jones and Godwin didn’t kill me, but if they did a little better, it pushes me up the standings. I will note that I didn’t land on Watkins until early Sunday morning, figuring that Tyreek will be slowed down enough by Jalen Ramsey that Watkins could end up open a lot. That isn’t exactly how anything happened, but I think my reasoning was sound. I obviously wish I had more Watkins everywhere, but you know what they say about hindsight.

Last, I just want to show you what some of my 150 lineups end up looking like. 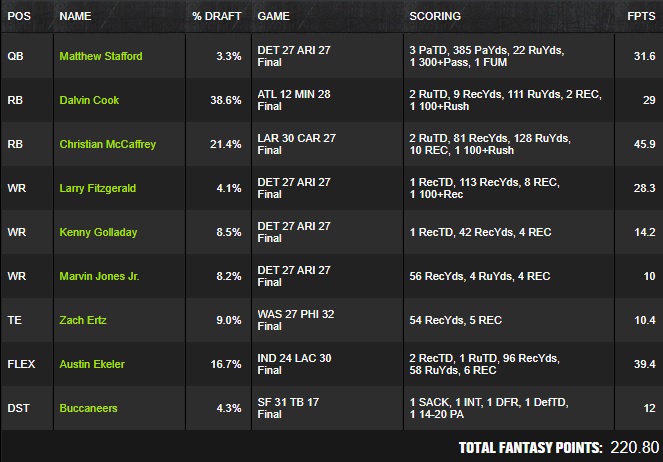 You know I was on Stafford and the passing game, and that showed up in my lineups. I have the pairing of both Golladay and Jones, as well as Larry Fitzgerald bringing it back. Almost all of my 150 lineups are constructed this way. It gives a large amount of upside if a game goes off. It also has value even if only one side goes off, so long as one piece of the other side gets some volume to pay off. Fitz didn’t need a ton of action to go off, but as Kyler woke up in the second half, he found Fitz downfield a couple of times. This is different than last season, where Fitz was mostly used in the short passing game. This is something to note going forward.

I filled out with Cook again, CMC, Ertz, and Ekeler. I know I have Ekeler as a fade, but for me, that just means that I will have less than the field will. Ertz ended up being a bit of a dud, even though the game script was in his favor. Cook and CMC did most of the work here.

I show you these not to point out good and bad plays, but to show you have I construct my rosters. While my strategy may evolve during the season, the bulk of my lineups are going to look like this. You don’t need to be different everywhere to succeed in the NFL. As the players get better at NFL, the chalk becomes a game of good chalk versus bad chalk. You can win a big tournament with two or three highly chalky players these days. Being contrarian does not mean playing a full lineup of guys less than 10% owned.

As nice as it is to go through my own plays and lineups for you, this will not be a weekly occurrence. Most weeks I will touch on one or two things that happened the previous week in my tournament article as needed. This game is as much about game theory and roster construction as it is raw statistics and correlations. My aim here is to teach you something each week about this great game we call DFS.

As usual, I am open to answer any questions you have, hit me on Twitter, but now it’s time for me to look forward to week two.