It’s hard to believe that it has already been three years. This day three years ago, the Cleveland Cavaliers finished the 3-1 comeback against the 73-win Golden State Warriors to win not only the first Championship in franchise history but Cleveland’s first championship in 52 years.

One of the greatest moments in sports history. I remember every detail from that day. I love Cleveland sports more than anything. This series really took a toll on me. The emotions that went through my head during every minute of every game. Just seeing my city, my beautiful city in the national spotlight was unimaginable.

All my life I have been told that I should be ashamed to be from Cleveland.

I’ve heard that my whole life. It really is weird that we view cities based on their sports teams. With the Browns being terrible always, and the Indians always losing the big game, the Cavs were our only consistent chance and finally breaking the curse.

But for one night, all the talk about Cleveland stopped. When you said Cleveland on June 19th, 2016, you were talking about a championship city.

The point of this article is to take you through the gut-wrenching day of game seven through the eyes of one of the biggest Cleveland sports fans.

Waking up that Sunday morning was horrible. Just the knot in my stomach from thinking about the game later that night. Waking up and not being able to eat. I got cleaned up, threw on the same 70’s yellow throwback Kyrie Irving Cavs jersey, the same Khakies, and the same Cavs hat that I wore for games five and six. I was not ruining this mojo I had going.

You will come to find out that I am very superstitious throughout the article. For instance, I always watched SportsCenter the day of the game. It just so happened that they showed every Cleveland failure over the years, just to throw it in our face.

John Elway driving 98 yards to force overtime in the 1986 AFC Championship game against the Browns, Ernest Byner fumbling at the goal-line in the playoffs, Red-Right 88, Michael Jordan hitting “the shot,” The Indians blowing the 1997 World Series in the 9th inning, the list goes on and on.

I couldn’t stand it, I was not alive for a single one of those moments and they made me sick. Don’t get me wrong, I have had my fair share of Cleveland heartbreak. Getting swept in the 2007 finals, The Indians blowing a 3-1 lead to the Red Sox in the 2007 ALCS, LeBron James leaving for Miami, The Browns being a consistent dumpster-fire, losing Kyrie Irving and Kevin Love in the 2015 finals. It just became a theme for Cleveland sports to let you down.

As the game slowly approached, I called my friends to make plans to go to the same restaurant we went to for game five and six (again, very superstitious.) Then 8:00 EST rolls around, its time for tip-off. I along with the 385,000 Cleveland natives did not know it at the time, but the most important night of our lives is underway.

The Cavs got finished the quarter with a 23-22 lead. The Warriors were doing what they do best, passing the ball and hitting threes. With a lead, you would think I was optimistic, but when Draymond Green is hitting three after three, I was nervous. If he is hitting his shots and Stephen Curry and Klay Thompson play their game, no way we win. But I will take the small victories against the winningest team in NBA history.

Oh boy, here we go again. The Warriors outscored the Cavs 27-19 to take a halftime lead of 49-42. Only seven points, but at any time I knew the Warriors could go on a massive run and put this game away. The third quarter all series was the time when the Warriors put the pressure on. This was the most important quarter coming up. Green caught fire, and the Cavs were going back to the same iso-ball that they did all series. I was officially a nervous wreck.

The Cavs completely flipped the script. They came out and punched the Warriors in the mouth. Irving caught fire, LeBron was hitting his jumper, and the Cavs were hitting threes. I still remember Kyrie Irving stripping Curry of the ball, racing up the court and hitting a ridiculous lay-up for an and-one to push the lead to 65-59. I think this is the first time in the game I really showed any emotion. The whole game I was just stone-faced. I gave my first fist-bump and screamed like I was the one who hit the lay-up. Then in Warriors fashion, they went on a run to tie the game at 71. Once the clock hit triple-zeros, the Cavs had outscored the Warriors 33-27 and now only trailed by a score of 76-75.

You want to talk about nerves? It was the longest quarter of basketball ever. Every shot, every pass, and every rebound I felt sick. The problem was no one was scoring. Both teams were in panic mode. For the Warriors, finishing off a 73 win season with a championship after being up 3-1. For the Cavs, delivering the first NBA title and first championship in 52 years to the city of Cleveland. At the 4:53 mark, LeBron hits a three-pointer to give the Cavs an 89-87 lead. This was immediately followed by a Warriors bucket to tie the game at 89.

The most excruciating time period of my life. Missed shot after missed shot by both teams. No one was scoring. Both teams knew the situation and where panicking. Both teams abandoned their gameplan and were just fighting to score. It was classic old-school basketball.

With 1:58 left in the game, and the score still at 89 a piece, Irving throws up a hop-step layup that wide. Andre Iguodala, the 2015 Finals MVP, comes up with the board and races up the court with Curry. It was a two-on-one with J.R. Smith being the only Cavalier back to try and make a play. Iguodala to Curry, back to Iguodala up for the layup……

Out of nowhere, and I mean nowhere a man comes jumps up to contest the shot. As Richard Jefferson said in an interview a couple years later,

“I’m watching this thing happen and all of a sudden I see this black-blur go out of nowhere.”

“I was like holy f*ck he just blocked that.”

LeBron James, like a superhero, comes out of nowhere to make the greatest play in his all-time career. He blocks the go-ahead layup, I was stunned, I didn’t even react, I just stared at the TV and had the same reaction that Mark Jackson had.

After a missed shot by Curry, the Cavs got the ball past halfcourt and called a timeout. This is the moment I cracked. I sat in the same exact position for an hour. I swear, I didn’t move a single inch. During the timeout, I ran to the bathroom and threw-up. I just couldn’t take it anymore. The nerves, the history, the failure, we are so close. I came out just as the game was about to start back up. They inbound the ball to Irving. He starts dribbling the ball to the right side of the three-point line. A screen by Smith gets Curry on to Irving to take Thompson off the ball. Irving dribbles, inching closer to the three-point line. With 0:53 left…

The Cavs go up 92-89, the Bar erupts, I jump out of my seat and scream. The glass of water I was nervously drinking spills everywhere, I couldn’t believe it. We were seconds away from a World Championship.

The Warriors quickly inbound the ball and try to answer back with a three of their own. Curry is frantically trying to get past Love. He is denied. He passes to Green who passes back to try and set it up again. Once again he is denied and Curry throws-up a wild desperation shot that misses and falls right into LeBron’s hands. The bar erupts again and I start getting emotional. The Cavs have the ball up three with 0:31 left.

The Drought is Over:

Irving races up the court for a lay-up but loses the ball. He gains possession back and passes to LeBron who is fouled (horrible foul by the way.) 0:14 remain.

The Cavs inbound the ball to Irving who drives to the bucket. He passes to a cutting LeBron who goes up for the dunk but is fouled. By LeBron’s reaction to coming down, you would have thought he had been shot. I practically shit my pants when he went down. All we needed was one free-throw. With LeBron being an average free-throw shooter, I was nervous about his “wrist injury.”

LeBron gets up to shoot. I close my eyes and hope. He misses the first. I let out an audible curse. The second free-throw….is good. 93-89 Cavs with 0:10 left.

All the Cavs needed to do was play defense but don’t foul. They did exactly that. Curry puts up a three that misses while Marreese Speights grabs the rebound to just put up another shot. It did not matter. The Cavs started to celebrate as Speights misses the shot.

“IT’S OVER! IT’S OVER! CLEVELAND IS THE CITY OF CHAMPIONS ONCE AGAIN! THE CAVALIERS ARE NBA CHAMPIONS!”

It happened. It actually happened. As the clock hit triple-zeros, I got really emotional. But didn’t start crying yet. I just smiled and put my hands on my head. I watched as North-East Ohio native, LeBron James, fall to the court and start crying, I watched as Kyrie Irving and Kevin Love celebrated together. I watched J.R. Smith cry with his teammates. I watched as my hometown Cleveland Cavaliers celebrated a World-Championship.

About 10 minutes later I walked outside in a state of shock. I walked into the parking lot and sat down. I listened as gunshots, fireworks, car horns, and anything that can make a noise goes off in the distance. I watched people running around the streets hugging each other. I couldn’t help it. As I sat that, I started to cry. I was literally sobbing.

All the frustrations, all the close moments, all the heartbreaks, it didn’t matter anymore. My city was the City of Champions.

This moment will never be taken away from us. It will forever be apart of Cleveland. So with that, I say thank you to the 2016 Cleveland Cavaliers, forever NBA Champions. And Always remember,

The 73 win Golden State Warriors Blew a 3-1 lead in the NBA Finals. 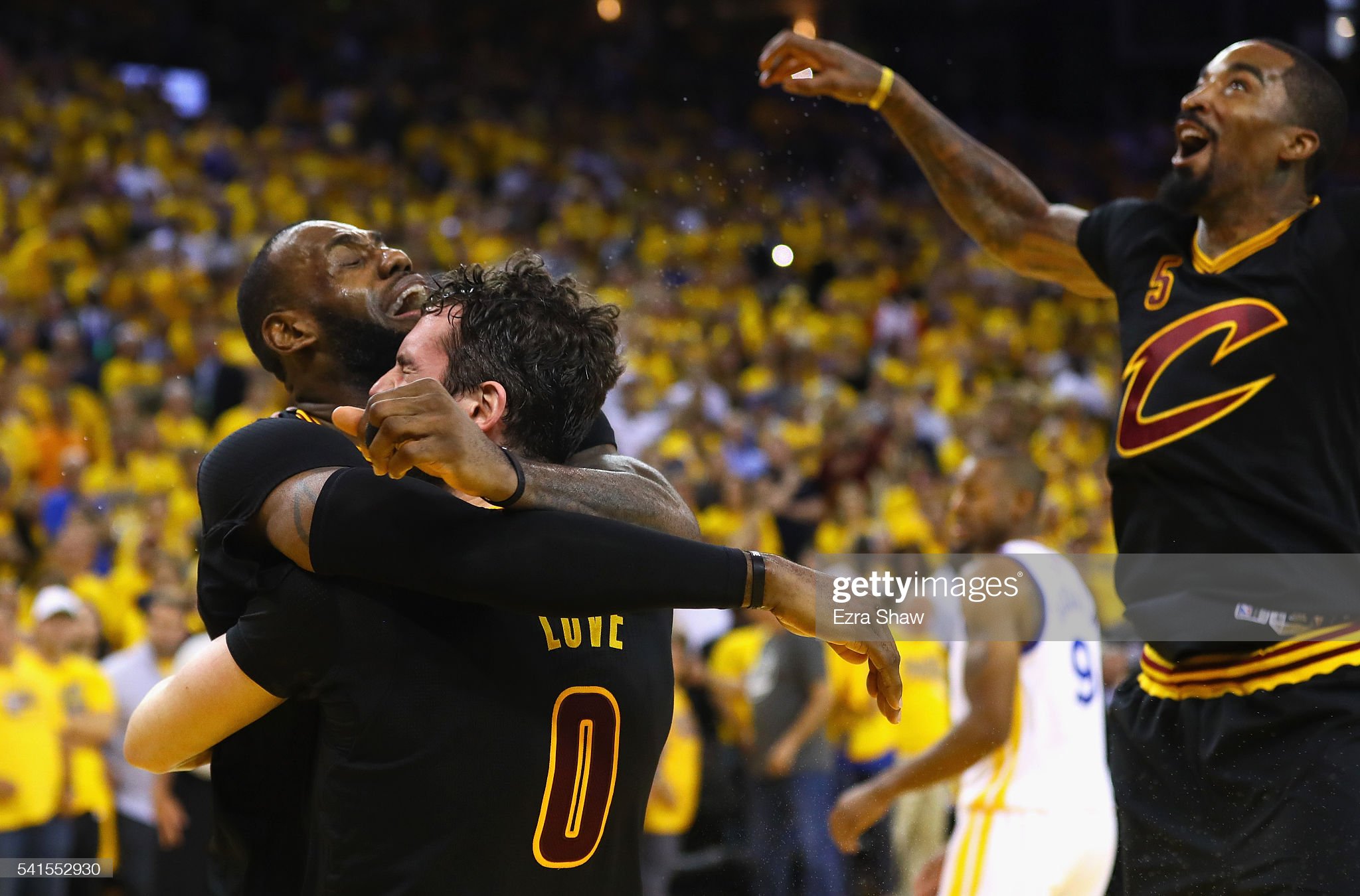