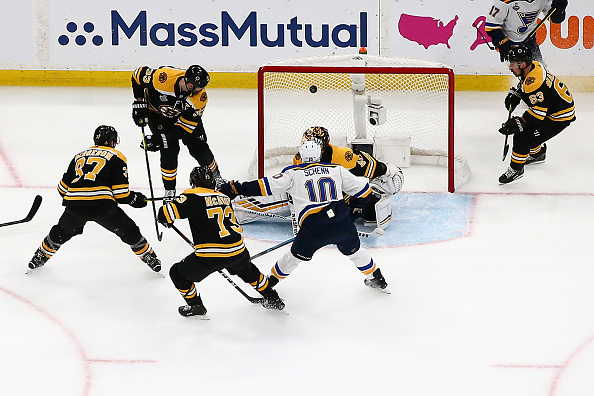 The Boston Bruins and St. Louis Blues were back at TD Garden for Game 2 of the 2019 Stanley Cup Final. The Blues down 1-0 in the series were looking to knot up the series and bring it back to St Louis with the home-ice advantage. Blues Forward Robert Thomas was scratched from this game after picking up an injury from the open ice hit by Torey Krug. Thomas has not been participating in most practices and morning skates. Robby Fabbri would take his spot in the lineup.

The Bruins opened up the scoring 4:46 in the first period, after getting having gotten the power play, shooting it through the legs of Jordan Binnington. It did not take long for the Blues to bounce back, as Robert Bortuzzo leveled the game, with both Tyler Bozak and Carl Gunnarsson assisting on the goal. Joakim Nordstrom put Boston back in front midway through the first period snapping an 11 game scoreless drought. His third goal of the playoffs, Sean Kuraly aided on the goal. He also added 5 blocks on the night.

Only four minutes later it was  Vladimir Tarasenko knotting the scoring once again. Tarasenko recovered a deflected shot from Jaden Schwartz, his first shot was blocked by Rask, but he was able to pick up the rebound and put it by the Bruins netminder. The Blues received a minute power play in the second period, after the high-sticking, double-minor against Boston’s Connor Clifton. But were unable to convert on it.

Grzelcyk left with about two minutes left in the first period after taking an elbow to the back of the head from Sundqvist. When asked on his condition, Bruins head coach Bruce Cassidy did not have any update.

The Blues were dominant in the overtime and basically looked like the better team for most of the night. It was Bostons goaltender Tuukka Rask that kept them from taking real advantage. Rask made 34 saves on 37 shots. It probably would never have gone to extras for Boston, had Gunnarsson shot not gone off the post with 2 minutes left in regulation which would have virtually sealed it.

The Bruins were not able to get anything going in those first four minutes of the extra time, holding them to no shots on goal and ultimately forcing them into a penalty. Thankfully for the Blues, the penalty was not necessary as it was Gunnarsson scoring on the delayed penalty 3:51 into overtime to give St. Louis a 3-2 victory over the Boston Bruins and tie the Stanley Cup Final at a game apiece. Alex Steen drew a hooking penalty in front of the net, and the Blues pulled Binnington for an extra skater. Ryan O’Reilly and Oskar Sundqvist chipped in with assists. Binnington had a solid night, turning aside 21 shots.

The Blues were 0-13 in Stanley Cup Final games coming into their matchup with Boston on Wednesday and are now tied 1-1 in the series heading back to St Louis.