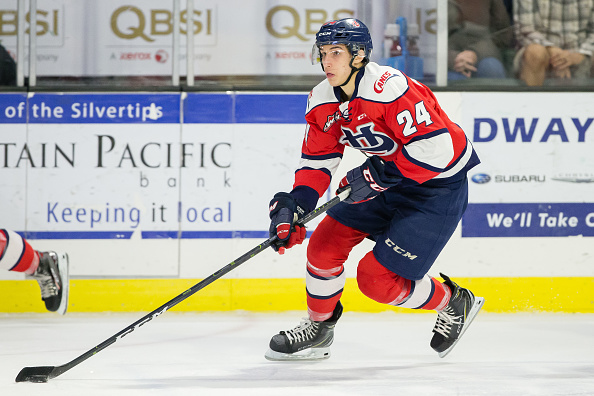 Jack Hughes and Kaapo Kakko are easily the two biggest names being mentioned for the upcoming NHL Entry Draft set to go June 21st at Rogers Arena in Vancouver B.C. There is a certain player out of the WHL Lethbridge Hurricanes’ camp that we should be paying attention to as well.

Considered to be the second highest rated center of this year’s draft behind only Jack Hughes, Cozens is pegged right now to fall somewhere in the top five overall.

Cozens is blessed with a skill set that many NHL scouts covet very much. He is already being compared to the likes of established NHL players Jeff Carter and Jonathan Toews. His best assets check off many boxes that a first line center in the NHL need to have. He is listed at 6’3”, 180-185 lbs, is extremely fluid with his great stride which gives him top notch acceleration, he has a great wrist shot, he is also a good puck distributor given the fact that he has great awareness in the offensive zone (while on the rush especially).

This past season with the WHL’s Hurricanes Cozens led all under-18 forwards in points with 84(34 goals, 50 assists). If we span the draft landscape and look into teams that should be coveting a player with this much upside in all aspects of the game we can pinpoint teams such as the Anaheim Ducks, Arizona Coyotes, Buffalo Sabres, Colorado Avalanche, Detroit Red Wings, Edmonton Oilers, Los Angeles Kings, Montreal Canadiens, and Vancouver Canucks. All teams are lacking at the center position (and other positions for that matter).

The only thing remaining for Cozens is to add more of a physical element to his game. At the Junior level, Cozens has really crafted his game geared to an up-tempo slick skating style, able to adapt to game flow without hesitation. Once Cozens adds weight onto his frame his overall game can only get better.