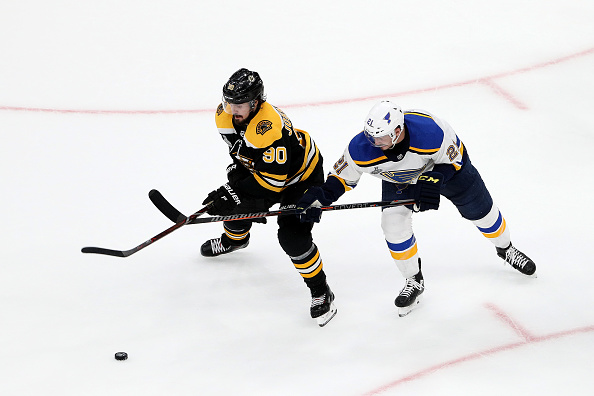 What a start to the 2019 Stanley Cup Finals tonight. The hockey world experienced game 1 of the series tonight, and it was a very back and forth game. After an exciting Game 1 win for the Bruins, let’s take a look back at the game itself, what each team can take away, and where the series could go from here.

From the opening draw, it looked as though this game would be a very back and forth game with each team getting good looks in the offensive zone. However, as they have done throughout the playoffs, the Blues struck first and rather quickly. About eight minutes into the game, Brayden Schenn was able to be patient and fire a wrist shot past Tuukka Rask on the blocker side. An opportunity that was created off a rebound of a shot from veteran defenseman Jay Bouwmeester that Vladimir Tarasenko was able to pass out to Schenn who put the Blues up 1-0.

In the second period, the Blues came out firing and once again it was their top line. This time, Tarasenko scores the goal off of a bad turnover behind the Bruins net by David Pastrnak, who sent it around to Schenn, and he passed it to Tarasenko who was able to use that blistering shot speed of his to send it past Rask. This took the energy out of TD Garden as the Blues took a 2-0 lead. However, the Bruins would answer back a minute later courtesy of defenseman Connor Clifton, who got a sweet pass from Sean Kuraly on a two-on-two chance, lifting it up and over the sprawling stick of Blues goaltender Jordan Binnington. The Bruins would go on to tie it up after a goal by Charlie McAvoy on one of five powerplays for Boston, the only power play that was successful for them. It was a beautifully placed shot on Binnington’s glove side that also deflected off of the stick of Blues captain Alex Pietrangelo, and we have a tie game.

The third period would remain tied for six minutes with each team, once again, having many scoring chances, but the Bruins came out firing after the second period, and it paid off. Kuraly was able to take advantage of a clumsy turnover by Joel Edmundson, which was picked up by Clifton, who passed to Noel Acciari down low, and Kuraly picked up the rebound and put the Bruins ahead. Brad Marchand would add an empty net goal late, and the Boston Bruins take game one by a final score of 4-2.

The Blues had a great game from the offensive side of things with chances aplenty and a great performance from their top line of Tarasenko, Schenn, and Jaden Schwartz. However, they had multiple costly turnovers in this game that would lead to chances for the Bruins on their end. They also got off lucky with the Bruins converting on only one of the five powerplay opportunities the Blues gave them. Binnington still had a great game saving 35 of 38 shots.

There are a couple different players who are deserving of being named Player of the Game, but for me, it’s Vladimir Tarasenko who is the Player of the Game for the Blues. Tarasenko seemed to be just about everywhere on the ice tonight, whether it was scoring his goal or simply just trying to forecheck to give the Blues a chance, Tarasenko was buzzing tonight.

The biggest thing the Blues need to change is they must be more disciplined. Five penalties are way too many to give up to a lethal Bruins offense, even though they got lucky tonight. However, they won’t get this lucky in the future, so they have to try and change that mentality now. The other thing they have to watch is their turnovers. Edmundson had a huge turnover tonight that cost his team the game. The Blues will have to be able to make the smart plays going forward, or they will pay.

Boston had plenty of opportunities in the game early on but ran into one of the hottest goalies in the NHL in Binnington. The Bruins were able to draw plenty of penalties to try and change the game on the power play, but it didn’t work often. They had unusual sources of offense tonight, but that is what comes with having tremendous depth like the Bruins do. They also had a decent defensive game holding the Blues to only twenty shots for the game.

While it was Kuraly who sealed the game for the Bruins, to me, the Player of the Game was Connor Clifton. Clifton was very active throughout the whole game, playing a role in the offense with the first goal of the game for Boston as well as an assist, but he also had the key takeaway that would lead to Kuraly’s goal. Clifton had a great all-around game tonight, and we’ll see if he can keep it going.

For the Bruins, no doubt this game was huge for them. The home crowd was rocking, and there may be no better feeling in sports than a hard-earned comeback victory. However, they have to be able to take advantage of their powerplay opportunities. As previously mentioned, they were only able to score on one of their five opportunities. The Blues will not give them that many chances in a game again, so throughout the rest of the series, they will have to be effective on the man advantage.

If this Game 1 was any indication, we are in for a great Stanley Cup Final. Both teams were able to set their own style of play throughout the game, and they will no doubt continue to try to do this throughout the series.