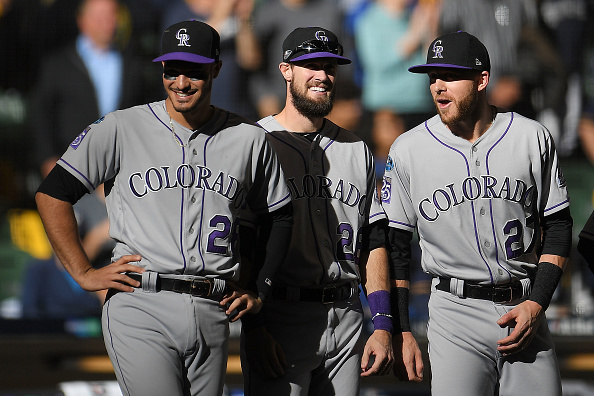 This article is for the all-day slate starting at 2:10, but if you only plan on playing the five-game slate starting at 7:05, I have tips for you as well. Also, some of the lineups aren’t released yet, so be sure to check that they are before submitting.

Colorado Rockies vs. BAL (Andrew Cashner)
Trevor Story (SS), Nolan Arenado (3B), David Dahl (OF)
DK: $15400
If you want to pay up for this stack, it should be well worth it. Both Arenado and Story hit two home runs a piece last night against the struggling Orioles’ pitchers. David Dahl is good value today at $4400 as a lefty going up against a right-handed pitcher in a very potent lineup. This stack will likely be highly owned, so if you like being contrarian, this stack isn’t for you.

Detroit Tigers at NYM (Jason Vargas)
Niko Goodrum (OF), Miguel Cabrera (1B), Nicholas Castellanos (3B), Grayson Greiner ( C )
DK: $13100
The Tigers are facing Jason Vargas today, so it should be a good day for them. Vargas is sporting a 5.92 ERA and isn’t doing anything particularly well. This stack provides fantastic value, as it is $2300 less than the Rockies stack with one extra player. Miguel Cabrera and Nick Castellanos have been struggling this season, but who better to get it going against than Jason Vargas?

Atlanta Braves at STL (Dakota Hudson)
Dansby Swanson (SS), Freddie Freeman (1B), Austin Riley (OF), Josh Donaldson (3B)
DK: $17500
The Braves have been on a tear lately and go up against a struggling Dakota Hudson. Austin Riley at $4400 and Josh Donaldson at $4000 have great upside for their low price. Freddie Freeman and Dansby Swanson are having really good weeks (and seasons) and this could be an explosive display of offense for the Braves.

Kansas City Royals (Jakob Junis) vs. NYY (J.A. Happ) (Game One of Double-Header)
Royals: Adalberto Mondesi (SS), Whit Merrifield (OF), Hunter Dozier (3B), Chris Owings (OF)
Yankees: Clint Frazier (OF), Luke Voit (1B), Gleyber Torres (2B),
DK: $30900
Warning: Game stacks don’t always work out, so play at your own risk. This stack provides decent value with guys like Whit Merrifield at only $4800 and Chris Owings at just $2300. J.A. Happ has struggled this season and has been knocked around numerous times. If you want a contrarian stack, this is it because not many people are picking against the Yankees right now. Jakob Junis just hasn’t been good, but Voit, Frazier, and Torres have, especially of late. This stack allows for solid pitching as well.