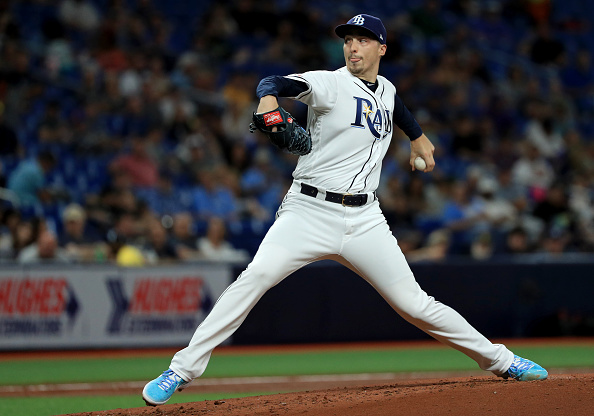 A good amount of top tier pitchers are available today so most lineups will feature a big-name pitcher. As of this writing there doesn’t appear to be any weather concerns so we shouldn’t have that to factor in. Top games to focus on for offensive production based on teams combined run lines are  Baltimore at Colorado, Atlanta at St.Louis, Kansas City at New York Yankees and Seattle at Oakland. Here we go, let’s go for a trip around the horn!

Snell gave up just one single earned run in his last outing against the New York Yankees. He fanned nine batters in six innings of work. Snell will be facing a Cleveland Indians team that has struggled against lefties this season, they are hitting .228 against southpaws which ranks them 24th. The Indians have the 14th highest strikeout rate in the league at 24.2%

With left-handed starter, Wade Miley set to start for the Astros, the Red Sox will likely give first base duties to Pearce. Over the course of his career, Pearce has been very effective against the opposite handedness. He is 7-for-21 with two homers and a .967 OPS. Pearce’s price tag is very affordable and should be one of the day’s best value plays.

Arenado has really found his home run swing of late and is producing at his usual high level, The Baltimore Orioles will be the opponent Friday night at Coors Field as lefty pitcher John Means gets the start. Arenado is sporting a .355 AVG with a .948 OPS in 86 plate appearances at home this season.

Mookie Betts is doing Mookie Betts type things and appears to be in a good spot ahead of the series opener tonight at Minute Maid Park. Betts has hits in eight of his last 10 games and will face soft-tossing lefty Wade Milley in this one. In limited at-bats(11), Betts has six hits and a very impressive 1.706 OPS. The Red Sox outfielder in three previous games against the Astros is averaging a very modest 12.3 DKppg.

The Phillies and the Brewers profile as one of the better games to look towards for offensive production. Bryce Harper is hovering around the .230 mark right now but has seen his production increase over the last seven games. (.310 with a .941 OPS.) Miller Park is a great hitters park which makes Harper even more appealing.