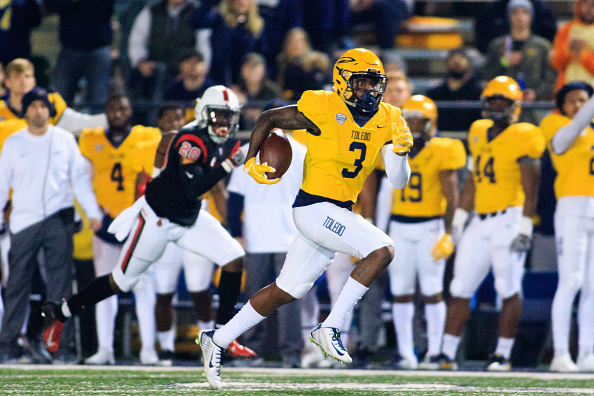 Johnson will be a jack of all trades wideout I wouldn’t be surprised if you see him lineup outside and in the slot, where he was used primarily with Toledo. According to Chris Adamski of the “Tribune-Review,” the young wideout is taking drills lined up on the outside. This could be either motivation for another Steelers wideout James Washington or Mike Tomlin wants Johnson to play the outside role to start.

To go along with Johnson’s versatility, he is a dynamic punt and kick returner averaging 20 yards per punt return and two touchdowns along with returning two as a kick returner as well. With a slew of moves at the line of scrimmage, he can attack both the nickel back and the outside corner. No matter where head coach Mike Tomlin puts him you should see results from day one barring any injuries.

One area that was the most intriguing for me and I’m sure others as well, was the eerie similarities he drew to Antonio Brown. Both coming from the MAC both labeled as return specialist coming into the draft and not to mention they are the same height (5’10.) To make things even better the Steelers drafted Johnson with the pick they received from the Raiders in the Brown trade (66th pick overall.)

Johnson does have some issues; one noticeable flaw is dropping balls at times. Johnson had a 62.6% cathing rate over his career at Toledo which is average, but it’s something new wideouts coach Daryl Drake can fix. If Johnson can tweak some aspects to his game, he should be a consistent contributor on Sundays day in and day out.