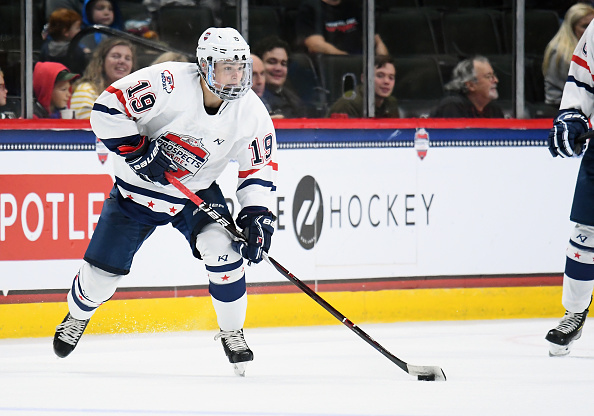 There are two players in Kappo Kakko and Jack Hughes, that seem to be the consensus top selections, but after them, its a lot more uncertain how the next tier shakes up. Alex Turcotte has been projected to go as high as third and as low as eleventh overall.

The son of former NHL player, Alfie Turcotte, he stands out because of his two-way play. While his two-way game and defensive abilities are his most heralded traits, don’t overlook his exceptional skating. His first step is powerful and gives him top-class acceleration.

Turcotte is a strong forechecker who does not shy away from contact and fights for inside positioning. It is very difficult to knock off him off the puck, once he gets going. He has soft hands, with the ability to make those difficult passes through tight spaces when the opportunity arises. Turcotte has the patience with the puck and finding seams. He is good at forcing turnovers in the offensive zone to create opportunities for either himself or teammates.

He has played second fiddle to Jack Hughes for years but is beginning to step out of his shadow. This seasons stint with the USNTDP Juniors produced 34 points along with a plus 27 in 16 games played. As a member of the US National U18 Team, he played alongside Hughes, Cole Caulfield, Trevor Zegras, Matthew Boldy. All of these players have the potential to be selected top 10 in the Draft. Loaded with such a talented roster, Turcotte was sixth on the team in scoring, contributing 61 points in 34 games.

Turcotte will probably need more time growing in the College ranks, intending to play for the Wisconsin Badgers next season. He dealt with a major hip injury that caused him to miss the first half of last season, so teams might be a little hesitant, I don’t see that factor being a real issue, however. In my opinion, he won’t go any further than sixth overall in the Draft. Both the Colorado Avalanche and Detroit Red Wings have been hotly rumored to be landing spots for the talented young center. If he can get the injuries under wraps, there is plenty to like about Turcotte. He certainly has all the tools to be successful, the question is can he live up to his own hype.