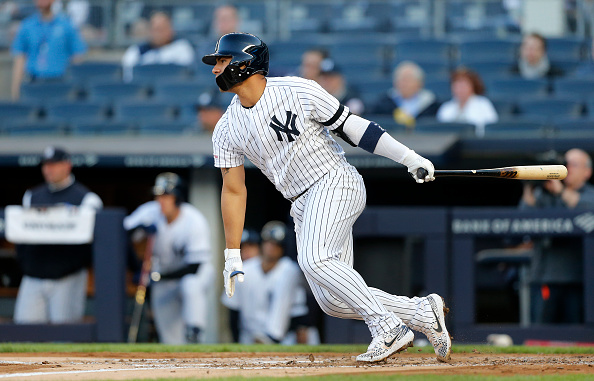 A nine-game all-day slate is being offered on DraftKings today. It doesn’t appear that any games will be threatened by mother nature so we can pretty much pick and choose without hesitation. Let’s jump right into it and take a trip Around the Diamond/ Horn/ Ball Park/ What Have you!

The Mets are a middle of the pack type offense as they are ranked 16th in the Majors in hitting at .244, and they strike out at a 24.7% rate which ties them for tenth. Strasburg is in the midst of having a fine season, 82 punchouts in 65 innings of work with a tidy 3.32 ERA. Against the Mets, this season he is 1-0 in two starts with 17 Ks, four earned runs in just over 12 innings of work. Over the course of Strasburg’s career, current Mets are hitting .222 with not a single big fly to their credit in 125 plate appearances.

My favorite stack of the day is the Bronx Bombers at Camden Yards and right-handed starter Dylan Bundy. Torres and Gary “Scary” Sanchez are ripping it up right now. If you can play both these guys, do it up. They are quite pricey so in all likelihood, you will suffer at other positions, let’s hope they continue to rake. As a team the Yanks are a collective .263 with a .845 OPS in 111 plate appearances, they have taken him deep five times, two of those from Kendrys Morales, who if he plays, will only cost you $3,400.

It seems like every time I do a write-up, the Houston Astros manage to be featured in some capacity. Despite Lucas Giolito(5-1, 3.35 ERA) being legit good this season, the Stros are a different animal and are virtually match-up proof. Gurriel has found his hitting stride of late going hitless just three times in his last 10 contests. Just like the Yanks are a good stack, the Astros profile well here too, they are hitting .341 with a 1.070 OPS in 53 plate appearances off of the Sox’s top pitcher.

Reddick is off to a fine start hitting .333 in 42 games this season and should be in the starting lineup for manager A.J. Hinch in this one. Reddick has taken Giolito deep once in eight career plate appearances and has driven in four runs.

If we decide to load up on Astros and Yankees we will have to find value at some point in our lineups. Pillar along with the likes of Buster Posey and Brandon Belt might be where you have to turn to. Pillar since his arrival from Toronto has had limited success, he is hitting just .204 on the season, but does have 24 RBI in 47 games. More encouraging is the fact that Pillar has hit Braves starter to the tune of 13-31(.419) and a .906 OPS.