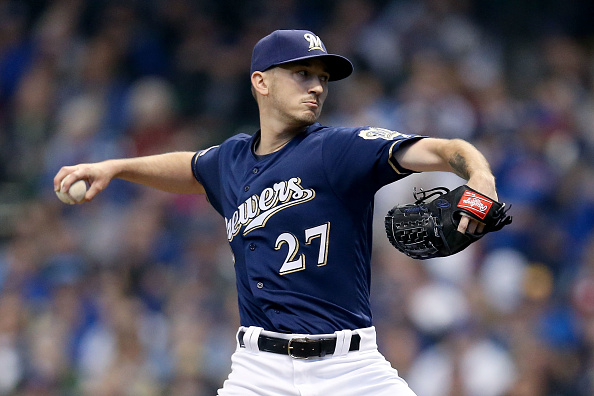 Zach Davies – The righty from the Milwaukee Brewers has been great this season. He is 5-0 and sporting a minuscule 1.54 ERA. His style of pitching matches up well today against the Cincinnati Reds. Davies is a contact pitcher and a flyball pitcher. That might sound like it shouldn’t work against a power-hitting team like the Reds who are sixth in the National League in HRs, but Davies has a few things going for him. He has only allowed four HRs in 52.2 innings pitched, his HR/9 is a career-best 0.68, and the wind will be blowing in from right field at about 13 mph. Despite the Reds having some pop in their lineup, they don’t hit very well overall, ranking last in the NL in batting average at .217 and 13th in OPS at .673.

Eric Lauer – The San Diego starter loves Petco. He has a very good 3.04 ERA at home this season. On the road? Not so good at 8.24. Lucky for Lauer the game is at home and he is facing a team that’s on a four-game losing streak. The Padres are also looking for the sweep and are currently 6-3 vs. the Arizona Diamondbacks this season. To make matters more conducive to a good pitching performance, the wind will be blowing in from left field briskly at 18 mph.

Martin Perez – Perez has made improvements this year that have been nothing short of mind-blowing. In his last seven games, he has thrown six innings six times and has five quality starts. He also has an excellent 41/13 K/BB rate over that span. The Los Angeles Angels have scored only five runs in their last three games and are without Andrelton Simmons. Add on the fact that Perez has actually kept Mike Trout human in his career against him (7-29 with a HR), and you have to continue to ride the hot hand.

St. Louis Cardinals – In the second game of the doubleheader, the Cards will face Homer Bailey. They absolutely destroy him. There are seven guys on the team that have at least 14 PAs against Bailey. Marcell Ozuna is the only one with a sub-.900 OPS. Feel free to mix and match just about anyone in the Cardinals lineup. The wind will be blowing out to left field at about 14 mph also.

Justin Smoak – Although Smoak hasn’t been hitting well lately (3-31 in his last 12 games), this is a game where he could bust out of that slump. He hits Rick Porcello very well in his career. Smoak is 12-40 with five HRs and a 7/12 BB/K rate against the Boston righty. Porcello has also been prone to the home run ball this season, giving up 1.6 per nine innings.

Yadier Molina – He will likely be facing the aforementioned Homer Bailey in Game Two of the doubleheader. Yadi has absolutely owned Bailey in his career. He’s 20-50 with three HRs and a 3/6 BB/K rate. With a sample size that large, there is no reason to think Molina won’t have a couple hits.

Albert Pujols – Although I highlighted Martin Perez before, Pujols could be a sneaky pick. He has excellent career numbers vs. Perez going 10-27 with a HR. Amazingly also, in 33 PAs against the Twins lefty, he’s walked six times and has never struck out. Although this is a different Perez, and also a different Pujols, the results could very well be the same and for a low price.