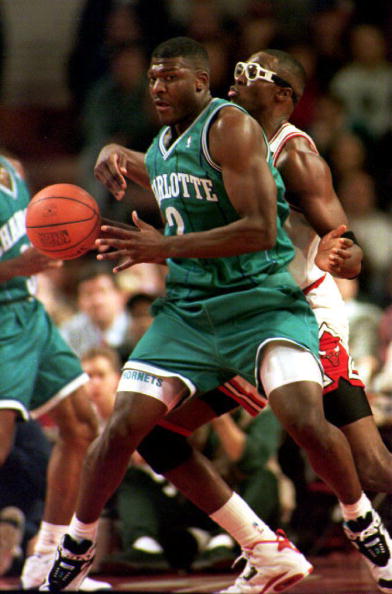 Larry Johnson is a player a lot of NBA fans have forgotten about or were too young to see him play. Johnson was an outstanding player before back injuries slowed him down.

Larry Johnson was a 1987 McDonald’s High School in Texas.  He started his college career at Odessa College from 1987 to 1989. In Johnson time at Odessa College, he averaged 22.3 points a game as a freshman and 29 points per the next season. Johnson won National Junior College Player of the Year award in both seasons at Odessa College.

After two seasons in Junior College, Johnson transferred to UNLV to play for the Running Rebels. In 1990 the Rebels beat the Duke Blue Devils to become the National Champions 103-73. Johnson scored 22 points and grabbed 11 rebounds in the game. In the 1991 season, UNLV went 27-0 in the regular season. The Running Rebels came up short in the Championship game, losing to Duke 79-77. In the 1991 season, Johnson took home the John R. Wooden Award and was named Naismith College Player of the Year. At his time at UNLV, he averaged 21. 6 points per game and 11.2 rebounds per game.

The Charlotte Hornets drafted Larry Johnson first overall in the 1991 NBA draft. In his rookie season, Johnson averaged 19.2 points and 11 rebounds per game. Also in that season, he took home the Rookie of the Year Award.

The former UNLV star averaged 22.1 points and 10.5 points per game in his second season. He was also voted to start in the NBA All-Star and helped lead the Hornets to the NBA playoffs.

In 1993, Johnson signed a 12 year, $84 million deal with the Hornets. At the time it was the richest contract in NBA history. In 1993-94 season Johnson averaged 16.4 points per game but only played in 51 games because on sprained back. In the Summer of 1994, Johnson played for the Team USA in the 1994 FIBA World Championships and won the Gold Medal.

Before the 1996-97 season, the Hornets traded Johnson to the New York Knicks for Anthony Mason and Brad Lohaus. In his time with the Knicks, Johnson was a much different player. He averaged 12.8 points per game in his first season with the Knicks. In 1999 the Knicks had a magical playoff run without injured star Patrick Ewing. In the Playoffs in 1999, Johnson hit an iconic four-point play against the Indiana Pacers in the eastern conference Finals. The Knicks went on to beat the Pacers and advanced to the NBA Finals. Johnson and the Knicks took on the San Antonio Spurs and lost in five games.

Larry Johnson retired from basketball in 2001 because of chronic back problems. He ended his career averaging 16.2 points and 7.5 rebounds per game.

Johnson went by the nicknames “LJ” and “Grandmama.” It would be interesting to see what kind of career Larry Johnson would have had if he did not hurt his back. I think he would have had a Hall of Fame career if not for the back injury, but you can say that for a lot of players.