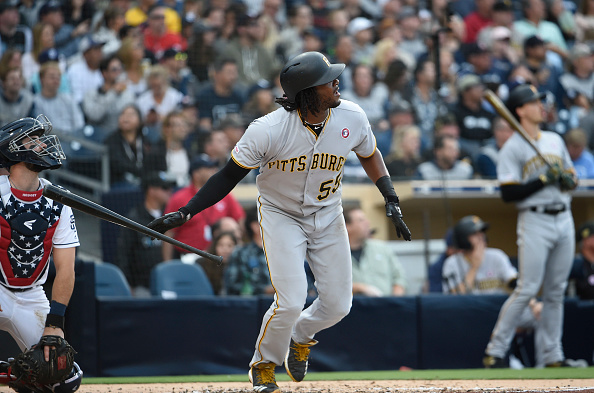 You know the rules: the seven best hitters of the week.

Vladimir Guerrero Jr. – 3B Toronto Blue Jays
There was quite a bit of hype surrounding Vlad Jr. He had to come in and start almost perfect to live up to it. It’s been a slow start for the son of a Hall of Famer; he was hitting.191 going into the week. The power he showed off in the minors came out this week, as he hit his first two in the same game, then added two more during the week to go along with a.571 ISO.

Josh Bell – 1B Pittsburgh Pirates
Ding-dong Bell’s bat was ringing a lot this week. This week he had two multi-home run games; the first was May 14th against Arizona, the second was four days later against the Padres. His average has jumped nearly 50 points this month as his .333 is fourth best in the National League.

Anthony Rendon – 3B Washington Nationals
Rendon has played well since returning from the IL. He continued this trend as this week his .435 is the best in the National League, and his eight RBI was second best. Unfortunately, his numbers can’t keep the Nats afloat in the east as they are six games under .500 and eight games behind first.

Christian Vázquez – C Boston Red Sox
Vázquez looks like his back-up days are over. You could attribute the turnaround of the Red Sox pitching staff with Vázquez moving into the starting role. He led the AL in average this week with .529, and the Red Sox have won seven of their last ten as they now sit above .500

Joey Gallo – OF Texas Rangers
As of May 20th, Gallo has 101 career HR and 97 career singles. He added four to the first and one to the latter this week to help him with a .417 average. Currently, he’s hitting .285, 73 points higher than his career average; Gallo has finished every season of his career under .210. He is tops in barrel % (27,5), exit velocity (96.7) and hit hard % (60) could be the reason for the massive increase in average. Gallo could become one of the most dangerous hitters in the game if he can add a respectable average to his power.

Willie Calhoun – OF Texas Rangers
Although a game under .500 (22-23) they sit in second in the AL West. They may not be best in the west, or even in Texas, but they’re much better than projected before the season. They seemed to have improved with Calhoun getting the call up to big leagues; he begins the season 10 for 21, including coming off the bench on Sunday to drive in the game-tying run in the tenth, the Rangers would go on to win 5-4.

Jorge Polanco – SS Minnesota Twins
No one would have guessed the Twins would be one of the first teams to reach 30 wins, but here they are along with a five-game lead in the AL Central. Polanco has been one of the catalysts in the contribution for this team, the best average in AL (.343) he continued his hot start with .433 avg.