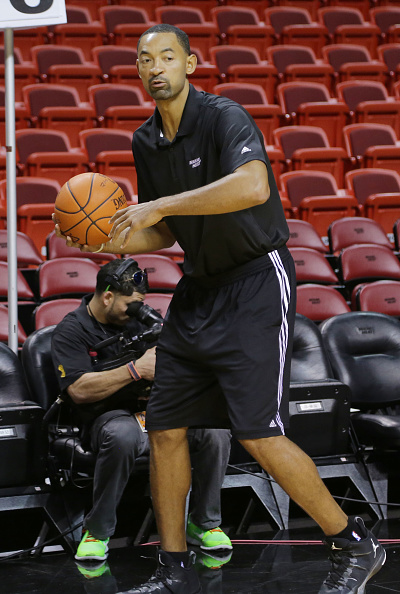 This report coincides with the earlier announcement of Ed Cooley signing a multi-year extension with Providence. Cooley was also in consideration for the Michigan job and was reportedly considered a serious candidate this week.

Howard, 46, is a two-time NBA champion and former NBA all-star. Since 2013, Howard has worked as a Miami Heat assistant under head coach Erik Spoelstra. His primary responsibility with the Miami Heat was helping develop the Heat’s big men, particularly Hassan Whiteside and Bam Adebayo. Howard played at Michigan from 1991-1994 and was part of the famous “Fab Five” team, along with Chris Webber, Jalen Rose, Jimmy King, and Ray Jackson.

While he lacks head coaching experience, he does have the support of his former teammate Jalen Rose, who publicly endorsed him last week.

“Have the Michigan Wolverines offered Juwan Howard the job yet?” Rose said on his show “Jalen and Jacoby”. “This ain’t just some nostalgic, ‘Oh, he was a member of the Fab Five, so let’s give him the job.’ He’s not only learned under some of the best to do it, Erik Spoelstra, Pat Riley. He also has the blessing of John Beilein… This is such a layup.”

Howard is expected to replace John Beilein, who recently left the Wolverines to coach the Cleveland Cavaliers. Beilin led Michigan to two Final Four appearances and four Big Ten titles during his 12-year stint with the Wolverines.