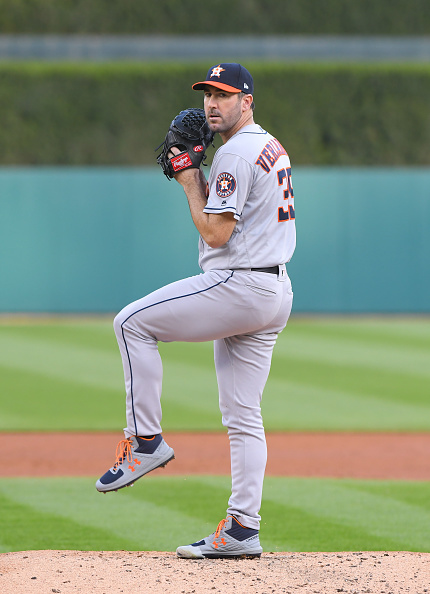 Welcome in. Last night felt like more of a tournament type of night. Tonight feels like a great spot to play cash games and tournaments. We have a monster slate of 14-games on deck. Let’s take a look at some core plays we should definitely have some exposure to.

Verlander is once again the clear cut number one option on the board tonight. Fangraphs has him projected to reach 27.10 Draftkings points, which is far and away the most. He’s averaging 26 points per game and has hit 33.4 in each of his last two. The White Sox are always a decent target because they pile up Ks. The Astros shut them out last night. Brad Peacock went five scoreless innings while striking out nine batters. If Peacock can strike out that many, you bet your ass Verlander can.

Ride the bull. Turnbull is set for a home date tonight against the pitiful Marlins. When I first saw his price for this matchup, my immediate thought was cash game SP2. He currently sits tenth in all of baseball with a 2.40 ERA. Turnbull has a 9.25 K/9, 0.75 HR/9, and 31.9% hard contact rate against. All of those numbers are very good. Platoon splits are always important on a day-to-day basis. Turnbull absolutely has the advantage against the Marlins, almost their entire lineup is right-handed. Turnbull’s K/9 rate jumps up to 11.16 against righties. He has given up zero homers in more innings pitched to them than against left-handed hitters. Righties are hitting only .178 with a .247 wOBA against Turnbull. The Marlins strikeout a ton and are tied for the worst average vs right-handed arms, hitting only .214. They also have the worst ISO, wOBA, and fewest homers hit.

Cano is a better hitter than he has shown to this point in the season. He’s not in his prime, but he still has power and had a pinch-hit double last night. His hard contact rate of 41.1% is right around his career high. But his HR/FB rate and BABIP are lower than his career average. A breakout is coming soon and at this price, I’ll bank on it being tonight against Washington hurler Erick Fedde.

Anytime you can get a player with three home run upside under $4,000 you take it. Vladdy Jr. is starting to figure out how to hit in the Major Leagues. Evidenced by the four home runs he’s hit in his last six games. Ride the wave.

It just feels like a big mashers sort of day. Yelich is at home where he seemingly hits a home run every time he plays there. Sonny Gray isn’t typically a pitcher to target against, but Yelich is a different kind of animal. This is more of a gut call than anything else.

One of the most popular cash game plays this year because of his price. Jackie Bradley Jr. only has to get on-base to hit value. I like him even more if he is hitting ninth in the Red Sox order. The top of the Red Sox order should be able to drive him in.

This is a contrarian, tournament only play. Verlander can give up homers. He usually gives up a solo shot early and then starts to settle in. Abreu is 15-41 with 5 HR and 6 RBI against Verlander. We could even use him as a one-off in the same tournament lineup we have Verlander in.

Milwaukee has too many good hitters in their lineup. Sonny Gray has been decent, but nothing spectacular. In his last two games, he has given up three homers combined and totaled only 9.1 IP.

Both sides of this game make sense in tournaments. They should both be relatively low-owned. Cano, Alonso, and McNeil as mini stacks on the Mets side. The Nationals side is a little

Covey is a gas can and the Houston Astros are kind of good at hitting the baseball. #Analysis. But really, Covey has an HR/9 rate approaching two and a 7.31 xFIP. Houston will be one of the higher owned stacks and for good reason.

Other Stacks: NYY, TEX, and SEA. (They should all be chalky.)