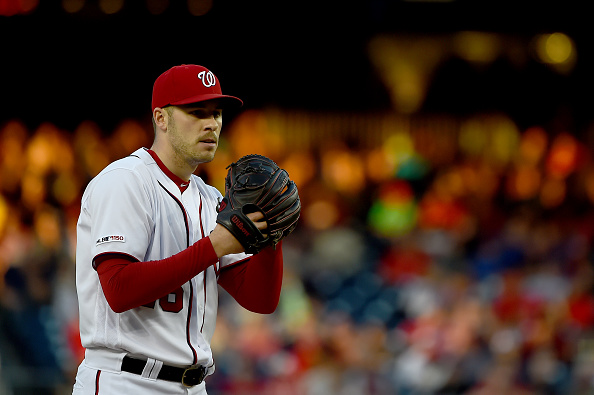 There are a few pitchers in good spots tonight, making it tough to pinpoint which two to play on Draftkings. Whenever that is the case, the best plan of attack is to filter in a few of them into different tournament lineups. Let’s dig into some players and matchups to take advantage of on this Monday night eight-game main slate.

Patrick Corbin is making the transition from pitching in Arizona to pitching in Washington look seamless. He is coming off an eight-inning masterpiece against the same team he will be facing tonight, the New York Mets. In that game, Corbin allowed only four hits and one earned run while striking out 11 batters. Usually, if a pitcher has faced a team as many times as Corbin has already this season (three), the advantage would go to the hitters. But the Mets are scuffling lately and have dropped five straight games. Pablo Lopez and Sandy Alcantara shut them down in back-to-back games. The Mets rank seventh lowest in hard contact rate against lefties (34%). They also strikeout 29% against them, which is the third highest marker in baseball. Corbin is my lock in cash games, but there are reasons to not use him in some tournaments. I expect him to be highly owned.

Soroka has a relatively safe matchup ahead of him in San Francisco against the Giants. This puts him in play for cash games. Soroka has a 0.98 ERA and is not getting enough praise for it. The Giants don’t have a very good offense and the ballpark will be working in Soroka’s favor. He has yet to allow a home run, knock on wood, and the Giants have only hit 35 of them. That ties them for fifth lowest in MLB. The Giants strikeout 24.1% of the time, so you are also getting upside with Soroka.

Weaver has been pitching well, sporting a 3.16 ERA and posting a 9.64 K/9 rate. The Padres strikeout at the highest rate against righties (27.6%) and are hitting only .228 against them. The only real lefty that we have to worry about in the Padres lineup is Eric Hosmer. I’ll play the percentages and take the chance that he doesn’t burn us. Petco Park in San Diego is notoriously a pitcher’s park, which helps make Weaver a safe bet.

We shouldn’t look at BvP as the be all end all, but Morales is super cheap and has Andrew Cashner‘s number. Morales is 7-14 with 3 HR, 6 RBI, and four walks. He also has a career .200 ISO and .339 wOBA against righties.

If Turner gets on-base, it’s basically a double. Since returning from the injured list, he has reached base in every game. Wilmer Font gives up a bunch of contacts and has a 7.08 ERA. Turner is in a good spot to produce at the top of the Nationals order tonight.

Mazara will be hitting in the heart of the Rangers order against Seattle starter Mike Leake. Leake has a tendency to let pitches leak over the middle of the plate and can give bombs. Mazara went 2-6 with an RBI, a double, and two runs the last time Leake pitched against the Rangers.

Stacking against Cashner can be risky. We’ve seen him be able to turn in decent enough outings for it not to work. My thinking will not be deterred just because of that. He can and will have games where he is lit up.

We might as well pair one of our SPs with this offense. Ownership levels might be down on the Braves because they will be playing in a big ballpark. Suarez will be making his first start of the season after being recalled from Triple-A Sacramento. He had a 6.33 ERA in six starts at the Triple-A level. The Braves certainly have thunder in their lineup and hit lefties well.

The extreme winds blowing in from right field might sway people from stacking the Rangers. The way the ballpark is constructed helps keep windy conditions in check. For that reason, I don’t view the wind as being that big of a factor. The Rangers could have a big game and have a high Vegas implied run total for tonight. They rocked Leake the last time they faced him, putting up nine runs on ten hits.

The White Sox are more of a contrarian stack. Peacock will be getting ownership as the Astros are currently the biggest favorites on the slate. When he struggles it’s usually against left-handed hitters. A three-man mini stack featuring Leury Garcia, Yoan Moncada, and Yonder Alonso will be one to use in tournaments. You could also swap out Alonso for Jose Abreu.

The Astros are always in play and the White Sox could be using an opener and making this more of a bullpen game. The Astros are one of, if not the, best offense in baseball. If you can fit them in your lineup, do it.