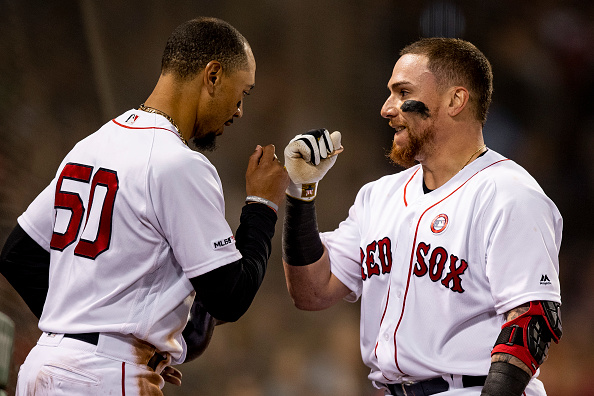 Honestly, you could probably stack the whole Marlins’ lineup for the same price, but I wouldn’t recommend that. Neither of these teams has been scoring a ton of runs lately and today’s pitching matchup favors Thor. Hopefully, he can do what deGrom couldn’t against a team that can’t hit.

If you enjoy going the “stars and scrubs” route when it comes to starting pitchers, Lopez is your scrub of the day. He’s had a rough year so far, boasting a 5.58 ERA, but he does average 9.5 K/9 against a Blue Jays’ team whose offense has been far from stellar this season. If you like going with two stars at the starting pitcher position, I’d suggest Hyun-Jin Ryu of the Dodgers against the Cincinnati Reds.

If there was ever a game to stack against the Houston Astros while they are on a 10-game winning streak, today is that day. The Astros are throwing Wade Miley today against a lineup whose core can dominate left-handed pitching (or any pitching). Martinez has seen his power return as of late as he is now up to nine home runs. Mookie Betts is back after a slow month of April. Since April 18th, Mookie Betts is hitting over .320 with an OPS over 1.000. Xander Bogaerts is relatively cheap at $4500 for a shortstop in the middle of this order who can hit.

At the time of writing, this lineup hasn’t been released yet so please check if these players are all starting before submitting your lineup. All three of these guys love mashing left-handed pitching and Drew Smyly is the driver of the struggle bus right now. He is averaging 10.5 K/9, but he is also allowing 6.1 BB/9, 2.3 HR/9, and 9.5 H/9. The ball should be put in play a lot today and if history repeats itself, then it could be a home run derby today.

Warning: Game stacks are extremely risky. I don’t like either pitcher in this matchup today which is why I can see it becoming an offensive shootout. If you punt catcher using this stack and take someone like Grayson Greiner of the Tigers ($2400) against Mike Fiers, which is a solid matchup for him (if the game doesn’t get postponed, if it does, take Jeff Mathis), then you will still have $16300 for pitchers. I took Shane Bieber and Reynaldo Lopez with the remaining salary. As I said earlier, play this at your own risk. Also, Thames can be replaced with Lorenzo Cain (batting leadoff) for $200 less. There are other ways to run this stack, but this is my favorite way.

Chris Sale hasn’t faced the best of opposition, so I’m not sold on the fact that he’s back. I called for a Astros’ sweep which means the bats have to be alive today. This is expensive but should be low-owned and well worth it.

The Mets aren’t hitting very well lately either, and for $5700, you don’t need a no-hitter from Alcantara. If he can secure the win, the value is great.

Athletics at Tigers (Rain Out potential)