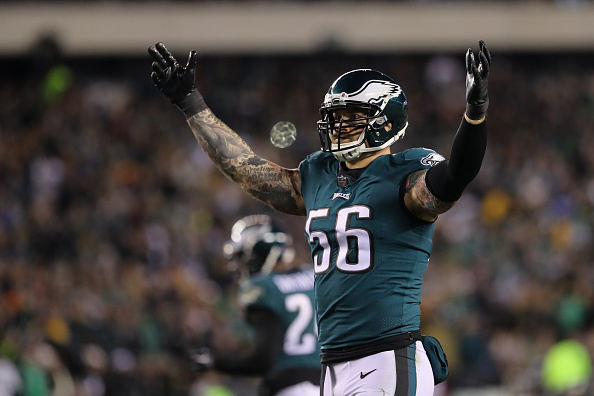 Last night, two-time Super Bowl champion defensive end Chris Long announced his retirement on Twitter, after eight seasons with the St. Louis Rams, one with the New England Patriots, and finishing his last two seasons with the Philadelphia Eagles.

Cheers. Been a hell of a journey. Eleven years and I can honestly say I put my soul into every minute of it. Highs and lows. I’ve seen them both and I appreciate the perspective. Gratitude and love to those who lifted me up. pic.twitter.com/Ap8zi73Ifl

Long started his career with the Rams after St. Louis selected second overall in the 2008 NFL Draft. While the Rams weren’t a good team during Long’s stint with them, he was one of the bright spots. Long recorded 54.5 total sacks during the eight seasons, including a career-high of 13 in 2011. However, he was never named to the Pro Bowl during this time with the Rams.

After the 2016 season, Long left the Rams and signed a one-deal with the Patriots as a replacement for the recently traded Chandler Jones. Long finally found team success with New England, being a part of a Patriots team that had an impressive come-from-behind victory in the Super Bowl against the Atlanta Falcons.

Long played only 60% of the team’s snaps during his one season in New England and looking for a larger role, he signed with the Eagles prior to the 2017 season. With Philadelphia, Long found even more team success, leading the Eagles’ scorching defense and help the Eagles earn the top seed in the NFC playoffs. After Carson Wentz went down with an ACL injury in Week 14, everyone stopped believing in the Eagles, and they started an “underdog movement”. Long and offensive lineman Lane Johnson led this charge, wearing dog masks while leading their way all the way to the franchise’s first Super Bowl victory.

Coming off the Super Bowl success, Long decided to spend one more season with the Eagles. During the 2018 season, he totaled 6.5 sacks, bringing his career total to 70. Long was known for being very generous during his Eagles tenure, as he donated all of his 2017 Game checks to charities. Following this and also being involved in the anthem protests, Long was named Walter Payton Man of the Year in 2017.

Teammates, fans, and friends showed their support to Long following his announcement.

You the best C-Long! Gonna miss you brotha. Congrats on a heck of a career. Great player, but even better teammate and person. Much love brotha! @JOEL9ONE https://t.co/Es5UeWWraz

What an impact someone can make in 2 years.

Plain and simple we don’t have a Super Bowl Championship without Chris Long.

Thank you for being a great player, leader, and a good man. All the best in retirement. And don’t be a stranger around here. pic.twitter.com/eLgONIG9xC

Congratulations brother, hell of a run! Enjoy every second of retirement and whatever else may come on the next phase of your journey. It is very well deserved!

We’re all so lucky as sports fans and humans to have had @JOEL9ONE in the league. He’ll be missed. https://t.co/OseCYSChHD

one of my favorite all-time rams retired today. thank you @JOEL9ONE for everything you did for the rams and for the city of st. louis. you always gave 110% & always showed love to the fans. your continued support for st. louis is awesome & we will always love you. #always91 💙 pic.twitter.com/JuenmI63N8