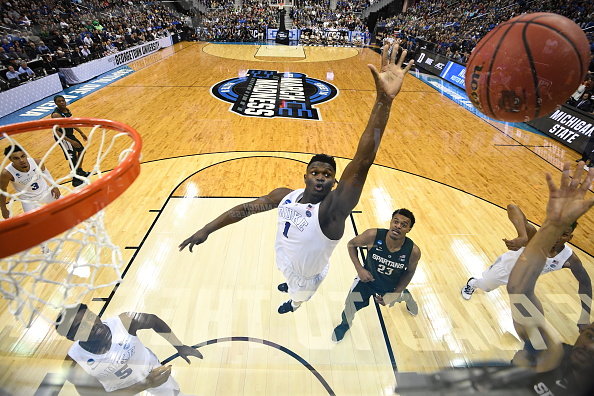 After a pretty intense NBA Draft Lottery last week, the top 14 picks in the upcoming draft are now revealed. In this article, I am going to predict the top 10 picks as I see how it could play out in June.

There’s no surprise here. Zion Williamson is the clear-cut number one pick. He’s the most dominating player in the draft and a force of nature. His athleticism mixed with his size is almost unheard of. Although the situation with Anthony Davis is about as clear as a murky fog, it remains to be seen if the Pelicans could potentially have one of the most dominant frontcourts in the NBA next season.

With Mike Conley starting to get up there in age, now 31, I can see the Grizzlies drafting their point guard for the future in Ja Morant. Morant is clearly the best point guard in this draft, even coming against significantly weaker opponents in the OVC. When you look at his ability to impose his will on the court, there is almost nothing you can do about it to stop him. He has the full package and everything you want from your point guard, especially with his high IQ and superb playmaking ability.

For years, the Knicks have been a team with a sorry excuse for a roster. After a disappointing night at the Lottery, the Knicks had the worst record in the NBA last season and had to settle for the third pick. You hate to lose out on Zion, but I don’t think you can go wrong with RJ Barrett here. I think he has good vision and decision making skills. He’s also very physical and can easily create contact to draw fouls whenever he wants. There’s been some speculation that the Knicks might trade this pick for Anthony Davis in order to allow New Orleans to draft Zion and RJ, keeping them together.

To me, the fourth pick is where the best talent drops off. Hunter is probably the next best player behind the previous three I just mentioned. I love his defense and shot blocking ability. While nothing else particularly sticks out to me, I will say that he is very versatile for a big man and is solid at every part of his game as a whole. I’m interested to see how he will play beside Lebron.

This is a team that, on paper, probably should not be picking this low at five. The Cavaliers were the biggest snub from the ping pong balls. With needs pretty much on the entire roster, Big 12 Player of the Year, Jarrett Culver, goes here. He carried Texas Tech to win the Big 12, along with the school’s first-ever NCAA Championship game appearance. He accounted for over 35% of scoring for TTU with 18.5 PPG and 3.6 APG. With that being said, I also like his defensive instincts on the other end. My only knock against him has to be that as a “shooting” guard, he needs to develop a more consistent shot.

In desperate need of a reliable point guard, the Suns should take Coby White at six. Of course, trading away solid point guards with the likes of Eric Bledsoe and Goran Dragic didn’t help matters. Not to mention bad draft picks such as Dragan Bender and Josh Jackson (over De’Aaron Fox, specifically.) The Suns will continue to load up on fresh young talent and draft a true point guard alongside Devin Booker and DeAndre Ayton. White can help facilitate the offense, take some of the pressure off Devin Booker and provide Phoenix with another strong go-to player.

The Bulls are another team with quite a train wreck for a roster and could use some help anywhere they can get it. Darius Garland of Vanderbilt played zero games last year for the Commodores due to a meniscus injury. He was one of the highest rated recruits out of high school but is still considered somewhat of a mystery. Garland could be a high-risk, high-reward player, but durability still remains an issue. I’m afraid it’s going to be another long year for Chicago fans.

Cam Reddish may be my most underrated player in the draft. He was overshadowed at Duke many times behind Zion and RJ Barrett. He has an excellent range from the three-point line but needs to improve his shot selection. He’s another versatile forward in the draft that can play any position while on the floor. I also love his length with a 7’1 wingspan. I think he will fit in well alongside Trae Young.

The Wizards lack big men and could use elite rim protection that Hayes can offer. You aren’t going to win many games with Thomas Bryant starting at the five, so this position needs to be addressed. He has a massive frame and can run the floor superior to fellow players at his position. He also has great mobility which can be used in the pick and roll game on both ends. However, Hayes isn’t a guy that’s going to come in and make much of a difference in the wins column for Washington.

Now is the time where America gets to witness if the Doncic trade was worth it. Atlanta acquired this pick along with Trae Young from Dallas in exchange for Luka Doncic. Considering the Hawks essentially have a 2-man roster with Young and John Collins, I’d say get as many players as you can. I love Rui because he has an adaptable skill set and is a smart decision maker. You can tell from the eye test that he cares more about team success than personal achievements. He is one of the best at scoring at the rim and handles the ball better than most bigs. Trae Young will continue to develop and if you plug in Reddish and Hachimura, the future’s looking bright for the young Hawks.