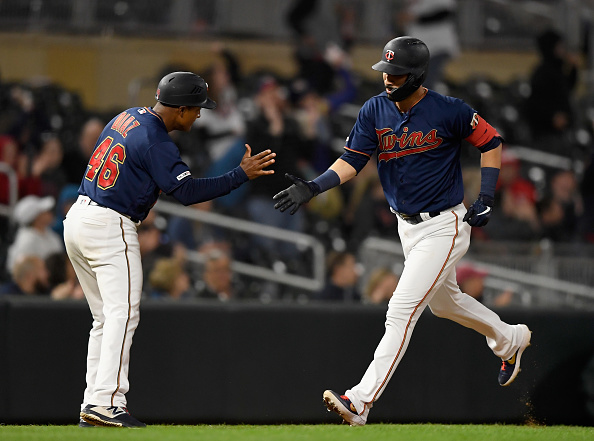 No delays. No long drawn out intros. You don’t have time. You need to set your lineups.  Let’s get right into the DFS picks for tonight’s games.

Morton has been in a groove this season, sporting a 2.64 ERA with 56 K’s in 44.1 IP. The Marlins are tied for second worst in Major League Baseball in hard contact percentage against right-handed pitchers (33%). They rank at or near the bottom in nearly every offensive category. Miami is the only offense in baseball with an ISO under .100 and they have the highest strikeout rate against righties (27.1%). As of writing this, Vegas had the Marlins implied run total set just over three. Only the Rockies have a lower implied run total, but the Marlins overall offense is worse. Instead of paying all the way up for Chris Sale, I’ll take the discount and go with Morton. If you want to pay up for Sale that is fine, but the Rockies can always run into a couple of home runs.

Caleb Smith has been pitching very well this season and has major strikeout upside. He’s coming off of an outing against the Cubs, where he struck out 11 batters in 6.2 IP. He’s averaging 22.2 Draftkings points per game but has no fewer than 25 points in his last five starts. Why would I pair him with his opposing pitcher Charlie Morton? I like to go for the highest floor possible when playing cash games. A win is worth four points on Draftkings. So, instead of looking at it as limiting your upside (which you are) look at it as one of those two pitchers is almost guaranteed to get you the win. If you need more evidence that this strategy can work, look no further than his last outing against the Cubs. Neither Jon Lester or Caleb Smith picked up the win, but they were both very successful daily fantasy plays.

Gonzalez has a six-game hitting streak, home runs in two of his last three games, and hits in 10 of his last 11 games. His price tag is way too cheap for how he is producing.

Royals fans have been calling for this for a while now. Nicky Lopez will be making his MLB debut tonight in a very good spot at home against Shelby Miller. He will be slotted in the two-hole and I expect the Royals to score some runs tonight. Lopez was slashing .353/457/500 with three homers and nine stolen bases at Triple-A Omaha.

Davis was a player I mentioned yesterday and I really like the matchup again today. Mike Leake can give up the long ball and we just saw Davis hit two of them last night. Because of the recent struggles before last night, his price tag is still way too cheap.

When the at-bats or plate appearances reach over 20, that is when I take an even closer look at the batter versus pitcher stats. Morton is the guy I’ll be rolling with in cash games, but I don’t expect him to get a no-hitter. Castro has had a lot of success against Morton, 12 for 30 (.400 AVG.) with 3 HR and 9 RBI.

Even with Syndergaard’s rocky start to the season, not many people will be looking to target against him. Everyone knows what he is capable of, but we can pick our spots against him. Rendon is 10 for 32 (.312 AVG.) with two homers and seven runs batted in lifetime versus Syndergaard.

I could’ve put him in the locks category because I really think he ends up doing something tonight. Soler is 5-12 with three solo shots and two walks against Miller. Soler has also hit 10 homers already this season.

It’s pretty warm in Kansas City and warm weather usually leads to the bats starting to heat up as well. Shelby Miller has not been good so far this season. I think a 7.48 ERA kind of speaks for itself.

Houston is loaded with power right-handed bats who are on fire. Carpenter is a lefty who gave up six earned runs on eight hits and two bombs in his first outing.

Boston is a great option almost every night. They will be tough to get to with their expensive price tags, but Kyle Freeland can be hit. I like a lot of the right-handed bats in the Boston order tonight.

Eickhoff has been very good so far this season with a 1.50 ERA, but I think it’s about time he gets lit up. He’s cut down on his fastball this season and has started throwing more sliders and curveballs. The tape is out on what he has been doing. Let’s see if a good hitting team like the Milwaukee Brewers can make the adjustments.