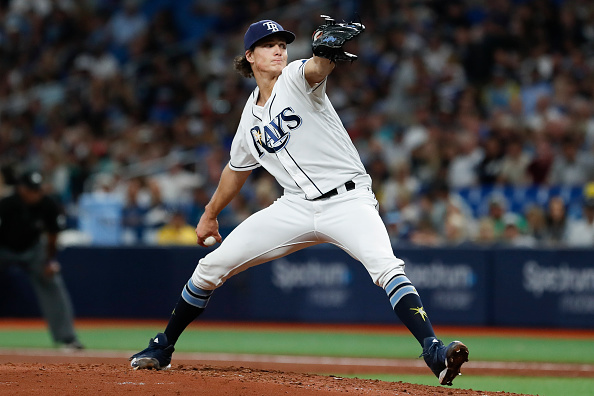 I’m sure many baseball fans were convinced that Tyler Glasnow’s season was over when they heard he left the game Friday night with forearm tightness in his throwing arm.  There were many armchair doctors on Twitter and other social media sites who had him diagnosed with all sorts of ailments, without any medical testing or knowledge of what they were talking about.

The forearm is not a very large area as body parts go, however it is the home of many muscles, tendons, arteries, veins, and nerves. There are eight flexor muscles in the anterior forearm that are responsible for curling the fingers and the wrist toward the palm as well as assisting in pronation of the wrist and forearm. Three of these are deep muscles and five of them are superficial. There are twelve muscles in the extensor compartment on the posterior of the arm which is responsible for extending the wrist and fingers as well as flexing the elbow. That is a lot of anatomical parts that have to work together to allow a baseball pitcher to be able to forcefully and accurately throw a pitch from the mound to the catcher.

There are a lot of games in a baseball season, and even though pitchers don’t pitch every day, the muscles in the forearm get a major beating every time they do. Glasnow was diagnosed with a mild forearm strain and is expected to miss four to eight weeks. I discussed Is it a Sprain or a Strain? previously. So if you want to know the difference, give this article a look.

Glasnow’s injury can be related to many things including:

A forearm strain is a tough injury to heal from. Not because the injury is so terrible, but because it is very difficult to make it through the day without using your forearm and hand. To allow for adequate recovery, limited use of the forearm must be undertaken. As the frayed muscle(s) heal, trying to use them while healing can lead to further injury.

I know many fans are worried about a UCL component to this. However, since no symptoms associated with that type of injury have been reported, I am not currently concerned with that possibility. Given adequate time for the inflammation to resolve, the micro-muscle tears to heal, and adequate physical therapy to help strengthen the forearm muscles, Glasnow should return to pitching without sacrificing his whole season. However, if he returns before the condition has fully resolved, it could become a nagging painful injury.