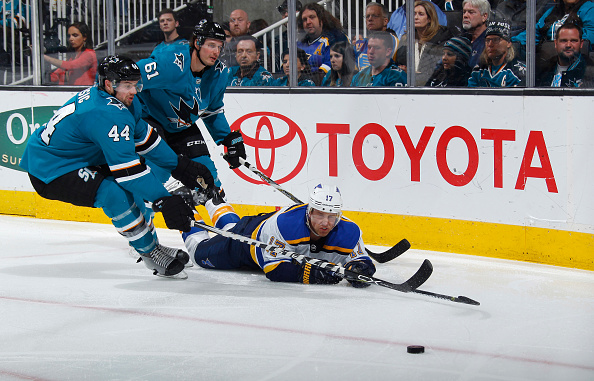 The NHL Playoffs have one more gigantic step before two teams duke it out to see which team will stand alone as the best in the league in 2018-19.

The San Jose Sharks play host to the St. Louis Blues at SAP Center in San Jose, CA for Game 1. Both of these teams had to battle for seven games against their respective opponents just to get to this point tonight.

It’s very much a battle of experience vs. the inexperienced when it comes to this series. Not that the Blues haven’t been to the Conference Finals in a long time. In fact, these two teams battled it out in 2016 to decide who ultimately lost to the Pittsburgh Penguins in the Stanley Cup Final. However, when it comes to the men between the pipes, one can’t help but look at the fact that Jordan Binnington (8-5) is just a rookie.

And while the 25-year-old netminder hasn’t been bad by any means, his 2.39 GAA is half-a-goal worse than his league-leading 1.89 GAA in the regular season.

It’s almost taboo in the playoffs to go with the obvious and say the X-factors in this series are the two goalies. However, they very well are. Martin Jones hasn’t been himself through his 13 starts (8-5) this postseason. In fact, he’s allowed 36 goals in those 13 games.

On the Red Sox broadcast on Friday night, Eddie Olcyzk said it best when he referred to these two teams as very similar in their own right.

They both have active defensemen, as well as a lot of speed and skill among their forwards. And when both of these goaltenders are at their best, they’re two of the most talented in the game.

It really is that close.

However, home-ice advantage really can galvanize a team, and the San Jose Sharks have one of the most passionate fanbases in all of the NHL. The “Shark Tank,” as it has been referred to, will be the venue for Games 1, 2, 5, and 7, and you best believe that place will be rocking in hopes to push their Sharks to the Stanley Cup Finals for the first time since 2016.