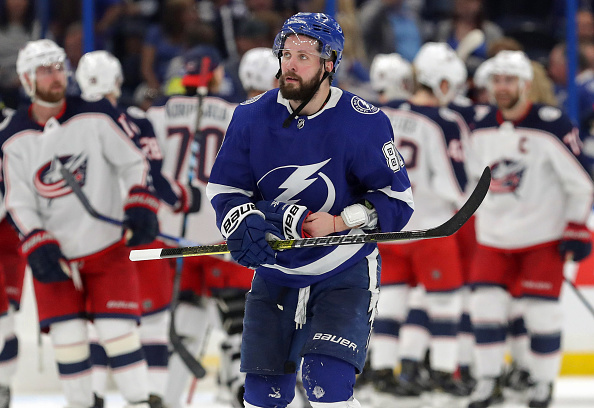 As a guy who watches hockey maybe twice a year at most, I just found out that the Tampa Bay Lightning are a thing. In fact, recently, they’ve been quite a successful thing it seems.

The weird thing is there’s a precedent for this.

The Lightning were incredible all year. In fact, they tied the all-time record for most wins in a season. Nikita Kucherov easily led the league in points with 128, with Steven Stamkos and Brayden Point each contributing over 90 as well. Their offense was lethal and their defense was quite solid too (5th least goals allowed) thanks to defensemen like Ryan McDonagh. Then came the playoffs and they got swept in the first round.

But they just tied the wins record, meaning that there was an equally dominant team that also won 62 games. In 1995-96, the Detroit Red Wings were the talk of the league, led by Sergei Fedorov, Steve Yzerman, and Nicklas Lidstrom. As incredible as the Lightning’s offense was, the Red Wings were even more goal-happy, scoring 325 times. They had wins of 7-0, 8-1, 9-0, and 11-1, and came into the playoffs having lost just twice in their last 27 games. Then came the playoffs, and while they didn’t have such an immediate collapse as Tampa Bay did this year, they showed weakness every step of the way before being calmly dispatched by Patrick Roy’s Colorado Avalanche in six games.

And that brings us to the other major sports.

In football, the most dominant team this era has been the New England Patriots, and it’s far from close. We’ve seen them in the Super Bowl an incredible nine times since the turn of the century, they’ve won six Super Bowls, and they’ve only missed the playoffs once since 2003. So it’s fitting that they would join this list. In 2007, they became the first team in 35 years to end the season with a 16-0 record. It was a new high for an already legendary dynasty. Then came the playoffs. Even Tom Brady & Co. couldn’t manage to pull it off. A last-minute Plaxico Burress touchdown on a SluGo route led to one of the biggest upsets in NFL history, and the Giants toppled the giants of football on that Super Bowl Sunday.

The Golden State Warriors blew a 3-1 lead. There’s no way you aren’t familiar with that collapse, constantly referred to using those exact words, even if you’ve never seen a basketball game in your life. It was already such a ludicrous feat for them to win 73 games in the first place, especially when you consider the fact that their head coach missed more than half the season with back problems. Their assistant, Luke Walton, led them to 24 straight wins to start off the year. The next season, he would be hired away by the Lakers, where it took him until April to reach his 24th win. Then came the playoffs. Fast forward to the NBA Finals, where they had the series all but wrapped up, before injury issues and an ill-timed suspension for Draymond Green gave the Cavaliers just enough room to be able to pull off the comeback.

In 2001, the Seattle Mariners equaled the MLB wins record of 116, a particularly impressive feat since that record had been set 95 years prior. A rookie Ichiro Suzuki set the league alight, and his fellow All-Stars, including Bret Boone and pitcher Freddy García, helped make this team look magical, and at points unbeatable. But then came – say it with me now – the playoffs. After struggling to even get out of the ALDS against the Cleveland Indians, they were thoroughly walloped by a New York Yankees team that would send them home in five, with an embarrassing 12-3 scoreline in the elimination game. Incredibly, they haven’t made the playoffs since. The Supersonics have made the playoffs more recently than the Mariners, and the Supersonics haven’t existed for over a decade.

Even the MLS can’t come to the rescue here. 1998 saw two teams, the Los Angeles Galaxy and D.C. United, win 24 of their 32 games, a number that hasn’t been equaled in the two-plus decades since. Did either of them win the MLS Cup? Of course not. The Galaxy were eliminated on penalties in the Conference Finals. D.C. United made the championship game but lost 2-0 to the Chicago Fire despite seemingly endless chances to score, with 22 shots and eight shots on target.

I find it really interesting that the teams that hold the winning records for the modern eras of each of the five major sports all fell apart in the playoffs. It certainly makes it hard to argue that any of them are the greatest team ever, even though they all were for the best part of a year.

Just not the most important part of the year.