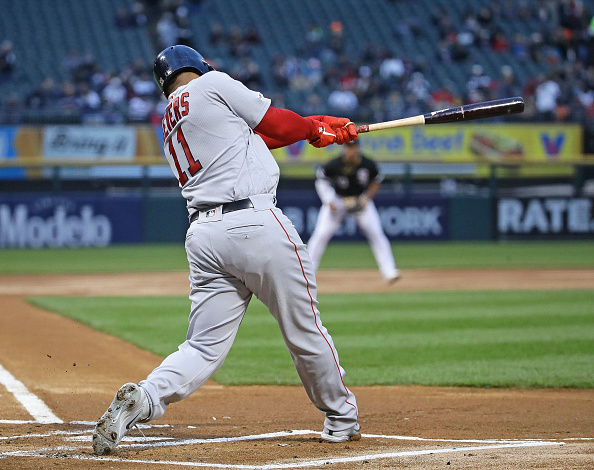 Rafael Devers was graded by Fangraphs as the #2 prospect in the Red Sox farm system and #22 overall back in 2017. He was evaluated as a pure hitter with a plus-hit tool and strong raw power. Devers burst onto the scene as a 20-year old in 2017, slashing .284/.338/.482 with 10 HRs in only 58 games. This promising start led to higher expectations for the young slugger. He followed up his debut with a disappointing sophomore season, where he hit .240/.298/.433 with 21 HRs in 121 games. This performance caused his stock to drop in 2019 Fantasy Baseball drafts. However, the early stages of this season are showing promising signs for the young Devers.

Devers has been off the radar so far due to his low counting stats, with only 1 HR in 37 games. Devers has hit the ball in the air at a lower rate in 2019, with his FB% falling from 38.6% to 24.8%. The good thing here is that he is not hitting more grounders, as his GB% has only increased from 46.2% to 50%. Devers has traded fly balls for line drives, which has decreased his power output thus far. However, given his strong raw power, it is likely that a HR surge is coming soon. Still only 22 years old, Devers is clearly advancing as a hitter. The improvements in plate discipline bode well for him going forward.

Devers has hit anywhere from 3-6 in a strong Boston lineup that has underachieved so far. The counting stats are coming soon. This is a young player that you should buy before he gets hot because the early improvements are highly encouraging. I like his chances of outperforming his teammate Michael Chavis, who has gotten off to a torrid start since being called up from the minors. Try to acquire Devers before it’s too late.