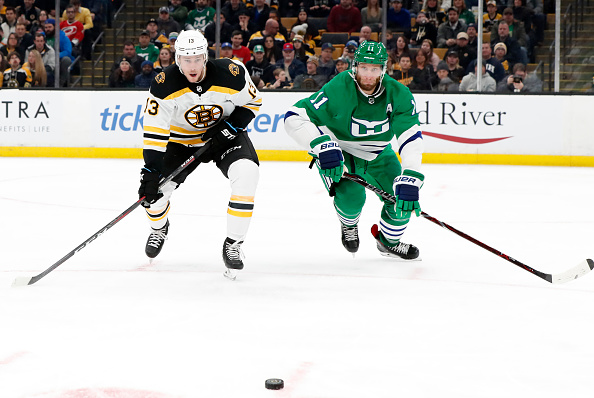 The Boston Bruins locked up their spot in the Eastern Conference Final on Monday night by defeating the Columbus Blue Jackets 3-0 in Game Six of their second-round series. Carolina will be facing a very familiar foe in the Bruins, having gone up against them in three of their five playoff seasons. For the Bruins, this is their third appearance in the conference finals in the last nine seasons.

These two teams played each other three times this past regular season, with Boston winning two of those meetings. Game one is on Thursday night, in Boston. Puck drop is at 8PM Eastern time.

Its been a long trek out of the playoff wilderness for this Hurricanes franchise, having missed out on the tournament for the past ten years. After eliminating the Washington Capitals, in a hard-fought seven-game series. They were able to sweep the New York Islanders in the next round, enabling them to rest up a bit. Along with the stellar goaltending. They are very good at cutting off opponents, time and space, as evidenced by the 27.8 shots allowed per game, second best overall in these playoffs.

Carolina could have goalie Petr Mrazek back for Game 1 after he returned to practice with no problems. Mrazek is 5-3 with a 2.22 goals-against average, .913 save percentage and two shutouts in nine playoff games. If he is unable to go, Curtis McElhinney would start. McElhinney has filled in admirably for the Hurricanes in these playoffs, having won the last three against the Islanders, to close out that series.

The Hurricanes main source of scoring in this year’s playoffs. Has come from Jaccob Slavin, Teuvo Teravainen, Jordan Staal and Warren Foegele. Each has contributed at least nine points in the 11 games played. Slavin’s 11 assists are tied with Erik Karlsson for most. They’ve received production up and down the lineup during this run. The real x-factor for Carolina, going into this next series, is Sebastian Aho.

Aho has been a real thorn in the side of the Bruins. When you consider in those three meetings, he has produced seven points, including four goals. And what could be a bit of a boost, Micheal Ferland could be returning for game one. He had been out the last eight games, with an upper-body injury.

Like Carolina, Boston has relied on great depth scoring, been tough defensively, and getting superb goaltending. Tuukka Rask has been fantastic in these playoffs, especially in this past series against Columbus. Which included a 39-save shutout in Game Six. The Bluejackets threw everything but the kitchen sink, at the veteran goaltender. The hockey gods were smiling on the Bruins, however.  In the way of a few post clanks, stingy defense, along with a number of timely saves by Rask. It just wasn’t happening for Columbus on the night.

While it has been six years since the Bruins last advanced beyond the second round of the playoffs. A number of those core performers, from that 2011 Stanley Cup final team are still with the Bruins. Including Zdeno Chara, Patrice Bergeron, Brad Marchand, and Rask. A new wave of Bruins has come along in the last handful of seasons, that have added plenty of scoring and defensive support. Players like Charlie McAvoy, Brandon Carlo, and Jake DeBrusk.

Marchand, Bergeron, Pastrnak, David Krejci and Charlie Coyle, have all been consistent sources of production in the first two rounds. Marchand has 13 points in his 13 playoff games, which includes, five goals and eight helpers. Pastrnak has been a true go-to offensive weapon for the club. In the six-game series against Columbus, he had four goals along with an assist. Combining his own pronounced scoring output, with his ability to create countless scoring opportunities for his teammates. He’ll be a true test for that beast of a Hurricanes blueline.

The Bruins will be without McAvoy for Game 1 of the Eastern Conference finals. He was suspended one game for an illegal check to the head of Columbus Blue Jackets forward Josh Anderson.