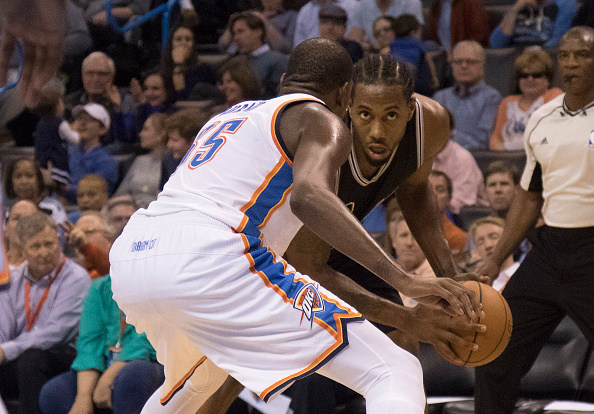 Kawhi Leonard and Kevin Durant are proving why they are top tier players in the NBA during these playoffs.

Kevin Durant is averaging 35.6 points, on 51.5% shooting, 5 rebounds, 5 assists, 1.2 steals, and 1.1 blocks per game. Durant has had an amazing run in this year’s playoffs, so far. There’s a negative and positive about Durant joining the Warriors, mainly this season. Yes, Durant joined a former unanimous MVP in Stephen Curry, a DPOY in Draymond Green, and one of the best two-way players in Klay Thompson, but Durant has been the main reason why the Warriors have looked dominant in these playoffs. Curry has not been himself for the most part of these playoffs, Draymond Green has played much better than he did during the regular season, and Klay Thompson has been consistent on both ends of the ball, for the most part. The question is if Durant goes to the Knicks next season or a team with only one star, will he still be unguardable, for the most part? Defenders need to worry about the greatest shooter of all-time in Stephen Curry, one of the best shooters of all-time in Klay Thompson, and one of the greatest scorers the game has ever seen in Kevin Durant. If there weren’t any stars or a superstar alongside Durant, the attention would be fully turned to him, just like it’s been turned to Kawhi Leonard. Durant may not be as dominant if the attention is solely focused on him.

As for Kawhi Leonard, he is averaging 32.3 points, on 59.3% shooting, 7.8 rebounds, 3.5 assists, and 1 steal per game. We all know that Kawhi doesn’t say much and doesn’t show much emotion, but he stands out amongst the other players, on almost any given night. He is calm, cool, and collected in the clutch, and has delivered for the Raptors on multiple occasions already in the playoffs. Kawhi will likely go to LA next season but probably not to the Lakers, instead, he will go to the Clippers. If that happens, Kawhi will continue to thrive and dominate on both sides of the ball.

I said that Durant doesn’t get as much attention as he would on the Knicks, for example, some of the attention goes to Steph Curry and Klay Thompson, along with Durant. But, Kawhi, especially in the playoffs, where Kyle Lowry disappears, for the most part, is the focal point for defenses. We’ve seen Jimmy Butler, Joel Embiid, Tobias Harris. and primarily, Ben Simmons on Kawhi Leonard this series. Three all-stars and Harris should have been an all-star this season. But, here is what makes Kawhi special, he will be able to defend Ben Simmons, Jimmy Butler, and Tobias Harris, in crunch time, put pressure on them, and not let them score.

We all know that Kawhi and Durant can score at will. Kawhi separates himself from Durant because of his defensive prowess. Kawhi will average 32 points per game in the playoffs, on 59% shooting, like it’s nothing, and lock down the oppositions best player, not just for one possession, but for most of the game. Durant is a good defender, you can argue that he is a great defender, but Kawhi is an elite defender, arguably the best defender in the NBA.

Now, people are coming to their senses that Kawhi may be better than Durant. For a while now, I have been saying Kawhi is the better basketball player, but people never took me seriously and brushed it off. But, now people are realizing Kawhi may be better than Durant. Just because Kawhi isn’t as vocal and doesn’t do all that talking like other NBA superstars, he at times is forgotten about. Kawhi proves that he is a unique player, on the basketball court, and doesn’t say a word about it. A few NBA analysts have already called Kawhi the best player in the NBA playoffs: Nick Wright, Shannon Sharpe, Max Kellerman, and Chris Broussard. Stephen A. Smith said that Kawhi reminds him of Michael Jordan. He went on to say that he is not saying Kawhi is like Jordan, but he reminds him of Jordan. Another analyst said that Kawhi reminds him of Kobe Bryant, especially when it’s crunch time. That is exceptionally high praise for Kawhi and well-deserved recognition.

Kevin Durant is right behind Kawhi, no question about it. But, Kawhi is just a different breed. In the series against the Sixers, Kawhi is averaging 38 points, on 62% shooting. Michael Jordan averaged 35 points on 60% shooting in one playoff series. LeBron and Durant have never done it. Kobe never did it. This goes to show how special Kawhi Leonard is and needs to be recognized for his greatness.