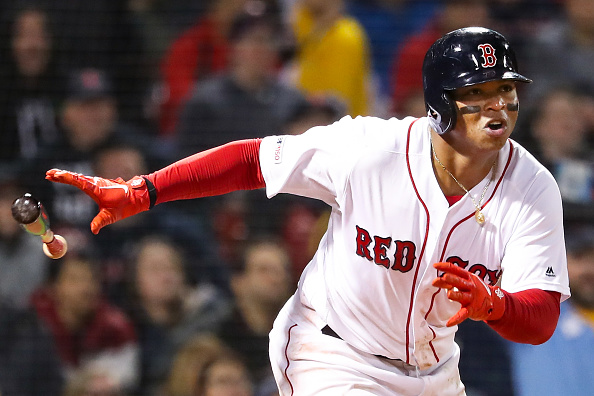 The Weekend is upon us and we will have plenty of games on the docket to breakdown starting with a full slate, minus one game(Cubs/Cards), on the schedule this evening. Let’s dig right into it!

Gray has performed admirably for the Reds this season. He carries a very impressive K/BB ratio of 36/8 heading into a home matchup versus a less than stellar San Francisco Giants club that is last in wOBA this season at .267. They are also 27th in runs scored with 98.

Story is having a fine season and gets a nice matchup at home against the Diamondbacks and Robbie Ray. Story has had double-digit DK pts over his last ten contests. Ray is also off to a fine start with a good strikeout rate of 10.3 K/9 but is also near five walks per nine at 4,73. The favorable ballpark and the fact that Story has had some success head-to-head versus Ray(17 at-bats, 2 HR, 2 SB, 1.076 OPS) makes Story a fine core play to your lineups.

It appears that the Bosox are slowly getting their offense back on track and Devers has been steady scoring at least 5 DK pts and averaging 9.6 over the course of his last eight games. White Sox starter Reynaldo Lopez has struggled to the tune of an ERA just over 6.00 in six starts. If you go with mid-tier pitching today some sort of Red Sox stack is definitely in play.

More than anything we want to try to fit Martinez into our lineups because of the very friendly price tag. Martinez is a consistent force as per usual in the heart of a very potent lineup that is more likely to turn things around than not. The White Sox rank third last in team ERA(5.31), 25th in HR/9 given up(1.51) and 24th in batting average against(.258).

The theme of Red Sox players continues with Benintendi whos’ price tag, just like Martinez, is very favorable. Adam Jones of the Diamondbacks conversely is in a good spot but will cost you more mostly because of the park effect.  Both are fine plays but the savings we get with Benintendi will allow you to round out a more balanced lineup.

The Mets and Michael Conforto project very well in today’s game at Miller Park. Brandon Woodruff gets the nod and despite a good K/BB ratio(38/10) has a hefty 5.17 ERA in six starts this season. Overall the Brewers rank 27th in team ERA at 5.23, 27th in hard hit% given up at 40.1 as well as giving up the second most HRs(55).