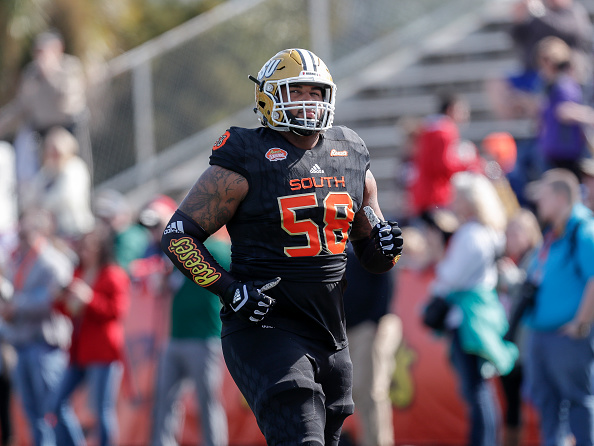 The Houston Texans, fresh off a playoff appearance, came into the draft needing offensive linemen and secondary help. The Texans need to do a better job to protect quarterback Deshaun Watson, who was sacked 62 times last season. Also, the Texans pass defense ranked 28th in the league. Let’s take a look at their draft.

The Texans taking an offensive tackle was the best decision, having allowed 62 sacks last season. But taking a project left tackle I am not so sure was a good idea. Howard does have the measurables to be a tackle in the NFL, but he is very raw and needs time to develop. The former Alabama State player can play both tackle positions, so he is versatile. He is powerful, but the Texans need to give him time to develop and not rush him into starting. I don’t like this pick, I feel you should not take a project tackle at this juncture of the draft.

Lonnie Johnson is a big corner at 6’2 and will play press coverage for the Texans. Along with his size, Johnson also has some speed to go with it. Texans are looking to play a lot more press coverage this year, so Johnson fits the scheme the Texans are moving to. The former Kentucky star was a junior college transfer before he came to Kentucky. Last season, Johnson had 23 tackles, four pass breakups, and one interception. He should be in the running to start alongside Jonathan Joesph.

Max Scharping gives the Texans another versatile offensive lineman. Scharping played right tackle, right guard, and left tackle at his time in Northern Illinois. He started all four years in college and is a good to terrific pass blocker, which is what the Texans need. Scharping has good lateral quickness that is required for the zone-blocking scheme. I can see Scharping coming in and earning a starting spot for the Texans.

I did not really get this pick for the Texans, they drafted two tight ends last year. I think they were going for the best player available at the time. Warring has high upside, he has the top-end speed for a tight end and can make plays. The former Aztec has excellent ball skills and can run away from linebackers. He will need to work on his run blocking, should be used as a receiving tight end. While not position of need, I can see why the Texans drafted Warring, a pass catcher that can help out Hopkins. Last season he caught 31 balls for 372 and three touchdowns. I gave C grade because it was not a position of need.

With this pick, the Texans added some depth to their defensive line. Omenihu is the type of player that Bill O’Brien is looking for at the position. He was the BIG 12 Defensive Lineman of the year and should see some time in the Texans defensive line rotation. Omenihu had 45 tackles, 18 tackles for loss, and 9.5 sacks last season. He should fit nicely with J.J Watt.

Xavier Crawford made first-team All-Mac selection last year. He could add more depth in secondary for the Texans. Crawford is not as big as Johnson but will play man press coverage. At his time in Central Michigan, Crawford played both outside and nickel corner positions. Last season Crawford had one interception. I see him as a reliable backup for all corner positions and special teams player.

Cullen Gillaspia probably will start at fullback for Texans and be core special teams player like he was at Texas A&M. Gillaspia could develop into becoming a power lead blocker and he can catch the ball out of the backfield

The Texans drafted positions of need, but some the players they took were head scratchers to me. Considering Howard that high was a significant risk, they better hope it pays off in the long run, or it could be more trouble on the offensive line.