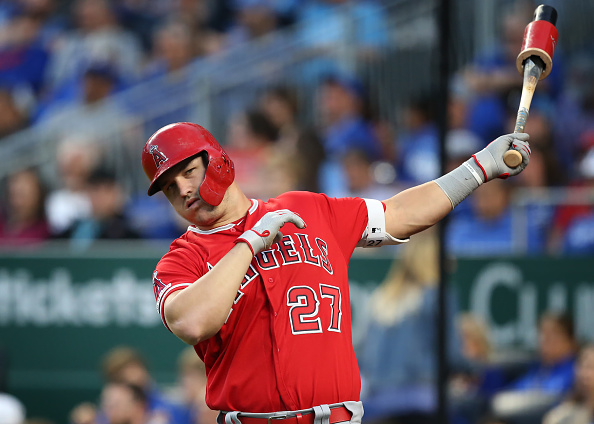 Every Tuesday or Wednesday we will take a look at the history of one team. You will get some background, iconic players and moments, and postseason results. This week, let’s take a look at the Los Angeles Angels of Anaheim, who has a pretty short history as one of the first expansion teams in history but still have a number of iconic moments, players, and stats.

The Angels became one of the first two expansion teams in the Major Leagues in 1961, along with the Washington Senators, who became the Minnesota Twins. The team was originally based in Los Angeles, with the simple name of Los Angeles Angels, and owned by Gene Autry, an old time Cowboy singing star. The Angels played in the original Wrigley Field in Los Angeles, as the Cubs’ ballpark was known as Cubs Park at the time. They played there for one season before then moving to the newly built Dodger Stadium, where they would play for four seasons while their new ballpark was being built in Anaheim.

Nolan Ryan was first signed out of high school in 1965 by the New York Mets and started to pitch regularly for them beginning in 1968, besides some time away for military service. In the Mets’ World Series winning season of 1969, Ryan mainly came into games in relief, where he had a 3.53 regular season ERA with 92 strikeouts. Ryan then pitched in 9.1 innings in relief in the postseason, only surrendering two earned runs and striking out ten.

Following the 1971 season, after shifting into a starter role the previous seasons, Ryan was traded to the Angels for six-time All-Star shortstop Jim Fregosi. Being traded to the Angels was really what jumpstarted Ryan’s career, and in his first season there, he started 39 games, going a solid 19-16, with an impressive nine shutouts and a crazy 329 strikeouts over 284 innings pitched. He struck out 383 batters in 1973, which set the record for the live-ball era, and he led the league in strikeouts in seven of his eight seasons with the Angels, 1973 being the only year he didn’t lead the league. In Ryan’s tenure with the Angels, he pitched four of his seven career no-hitters, becoming the Angel to pitch a no-hitter in 1973, in which he pitched two only two months apart.

Ryan helped the Angels get their first ever playoff berth in 1979 on a team managed by the player the Angels traded Ryan for, Jim Fergosi. Ryan became a free agent following that season after the Angels failed to reach the World Series and signed with the Houston Astros. In Ryan’s eight-year tenure with the Angels, he struck out over 300 batters five times and only had less than 200 twice.

Ryan had a remarkable 27-year career with the Angels, Astros, and Rangers, striking out over 5,000 batters, being the oldest pitcher to lead the league in strikeouts at 43, and holding the record for most games with 15 or more strikeouts with 26. Ryan also finished his career with a 324-292 record, a 3.19 ERA and 61 shutouts. Ryan retired in 1993 and was elected into the Baseball Hall of Fame in 1999. The Angels retired Ryan’s number 30 in 1992 while he was still playing.

After seven outstanding seasons with the Montreal Expos, where he averaged 33 home runs, 100 RBIs and 173 hits, Vladimir Guerrero “Vlad” signed with the Angels as a free agent following the 2003 season. Vlad was a notorious free swinger, but even so, never struck out more than 95 times in a season. Guerrero famously went with a no batting gloves look, with pine tar covering his bat and helmet, and he was seemingly able to hit any pitch, as he was famous for getting hits on balls that bounced in the dirt.

Even after the great seasons, he had from 1997-2003, Vlad had an even more outstanding season in his first season on the Angels, posting a slash line of .337/.371/.398. He also smashed 36 home runs while driving in 129 RBIs on his way to taking home his first ever MVP award. Guerrero made the All-Star roster in all of his seasons with the Angels besides his last two and never batted below .295 with at least 15 home runs in all those seasons, with at least 27 in his full seasons. Guerrero retired following the 2011 season as was elected into the Hall of Fame in 2018. He finished his career with a .318 batting average, 449 home runs, 1,496 RBI, and 2,590 hits.

Rodney Cline “Rod” Carew had a phenomenal 12 seasons with the Minnesota Twins, winning the Rookie of the Year in 1967, winning the MVP in 1977, and having over a .300 batting average in all but his first two seasons. Following the 1978 season, Carew was traded to the Angels, after winning his seventh and final batting title that season with an average of .333. In his MVP season of 1977, Carew flirted with the crazy .400 mark, batting .388 with 239 hits, 128 runs scored, and 100 RBI. Carew played at second base up until 1976 when he moved to first base and led the Angels to their first two American League West Titles in 1979 and 1982. Carew batted .294 in those seasons in the ALCS for the Angels, and never batted below .280 in the regular season for the rest of his career, as he retired in 1985 after 19 MLB seasons, seven of them with the Angels. Carew finished his career with a .328 career batting average, 3,053 hits, seven batting titles, and he made the All-Star roster every season but his last. Carew was elected into the Hall of Fame in 1991 and elected to go with a Twins hat on his plaque where he spent his first 12 seasons with.

The Angels had not seen any Postseason success until 2002, only making the playoffs three times in 40 years, and not winning series. Mike Scioscia took over as manager in 2000, and then in just his third year managing the team, brought them back to the Postseason in 2002. Led by such guys like Garret Anderson, Tim Salmon, Troy Glaus, and rookie pitcher John Lackey, the Angels started off slow but found their way to a 99-63 record and a slot in the playoffs for the first time in 15 years. The Angels then won their first Postseason series against the Yankees in the Division Series in four games and ran through the Twins in five games in the ALCS, highlighted by Adam Kennedy’s 3-homer performance in Game 5, to make it to the World Series against the San Fransisco Giants. The Angels were on the brink of losing their first trip to the World Series, losing 5-0 in Game 6, down 3-2 in the series, until they rallied for three runs in the seventh and three more in the eighth. Led by rookie pitcher John Lackey in Game 7, the Angels won the game 4-1 to take home the World Series trophy. Garret Anderson started all season on the hitting side, bashing 29 home runs with 123 RBI and 56 doubles with a .308 average. Troy Glaus took home the World Series MVP after hitting .385 with three homers and eight RBI throughout the series.

The Angels then continued to have success, contending for the playoffs every year, led by the addition of Vladimir Guerrero and developing young stars such as Francisco Rodriguez, who was a stud closer for many years for the Angels. They won division titles in 2004, 2005, 2007, 2008, and 2009, but weren’t able to replicate the postseason success the 2002 team was able to accomplish. They were one of the best teams in the league in the first decade of the 21st century but just weren’t able to get back to the World Series.

Mike Trout made his debut in 2011 after zooming through the minor leagues after being drafted in 2009 and had one of the best rookie seasons in major league history in his official rookie season in 2012. Trout had a slash line of .326/.399/.963 with 30 home runs, 83 RBI, and 49 stolen bases. Trout unanimously took home Rookie of the Year honors that season, has made the All-Star team every season, won a silver slugger every season, and has finished in the top four in MVP voting every season, winning the award in 2014 and 2016. Even with, when it’s all said and done, the greatest Angel and one of the greatest baseball players on the face of the earth ever, the Angels have not had any postseason success during his tenure so far, after breaking through with 98 wins in 2014, only to get swept by eventual AL Champion Kansas City Royals. The Angels locked up Trout for the next 12 seasons, agreeing to a 12-year $325 million extension prior to the season, and are hoping to not waste his extraordinary talent and create some postseason success and get back to the World Series.