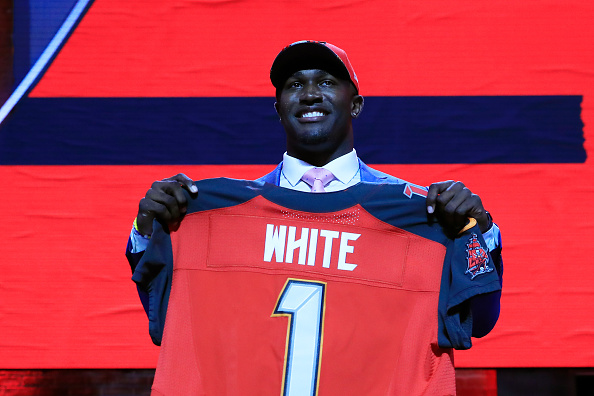 The Tampa Bay Buccaneers were focused on defense early in the 2019 NFL Draft, picking a potential top linebacker in this class, in Devin White and then grabbing a talented corner out of Central Michigan, Sean Bunting. Two sensible picks that shouldn’t backfire. Following the Bunting selection, they grabbed two more defensive backs, including another corner, as well as a safety. Given Tampa Bay’s pass defense was a real mess last season, surrendering 259.4 yards per game to rank 25th in the NFL. Deciding to go defensive back early and often, they did a good job of focusing on that deficiency and trying to fix it.

Round 1, Pick 5:  Devin White, LB LSU
With the Buccaneers really needing to upgrade the team’s linebacker group, with the offseason loss of Kwon Alexander. Adding White was a no-brainer choice at number 5. What he brings to this Bucs team, is a player that brings a combination of strong work ethic, competitiveness, and rare speed. He made huge strides in his production over the last two seasons at LSU. In 2018, he posted a total of 123 total tackles, 62 solo, and three sacks.

All-Pro potential with the ability to be a difference maker against the run, in coverage, and blitzing the quarterback. He has a lot of potential, that is just waiting to be untapped, given the right coaching. Working under someone as seasoned as coach Bruce Arians, is a great environment for the young prospect to be landing in.

Round 2, Pick 39:  Sean Bunting, CB Central Michigan
Tampa Bay got themselves a true playmaker, having picked off nine passes in the past three years, along with 15 passes defended, and 104 tackles. 72 of those tackles were solo. He’s very reliable, having played in every game, in three full seasons at Central Michigan. Bunting won the Chippewa’s Defensive Player of the Year award for 2018. He has good size, speed, and above average length. The Bucs secondary is begging for players with his kind of skill sets.
Grade B+
Round 3, Pick 94: Jamel Dean CB Auburn

Going corner, with two straight picks, the Buccaneers decided to target, Dean out of Auburn. Dean’s combination of height, weight, and speed are psychical tools that are welcoming. One red flag, however, is his three knee surgeries. Fair play to him, Dean was still able to run a 4.3 40 yard dash at the NFL Combine. He has been a consistent factor at cornerback for the past two seasons at Auburn, contributing, 73 total tackles, 15 defended passes, and two interceptions. He joins former Auburn defensive back Carlton Davis in the defensive backfield for Tampa Bay.

Round 3, Pick 99: Mike Edwards, S Kentucky
On day two, the Bucs decided to use them all on defensive backs, hoping to remodel that meek secondary from last season. Edwards a true playmaker in his own right, picked off ten passes, along with two touchdown runbacks and 100 tackles at Kentucky. He started every game in his last three seasons in College. Has a good shot to contribute in his first season as a Buccaneer.

Round 4, Pick 107: Anthony Nelson, DE Iowa
The Buccaneers went defensive end, in the fourth round, deciding to go with 6-foot-7, 271-pound end, Nelson out of Iowa. In Nelson, they were able to get a player, that can get to the quarterback, and make him sweat.  He had a staggering nine and a half sacks last season as a junior. On top of that, he also knocked down seven passes and forced four fumbles. Uses his long arms to keep blockers away, along with good size and speed.
Grade C+
Round 5, Pick 145: Matt Gay, K Utah
Tampa Bay was in serious need of a good kicker going into the Draft. After completely whiffing on the Roberto Aguayo pick in 2016, where they used a 2nd round pick. They decided this time to wait on taking one. Ranked 25th overall in field goals made and third last in field goal percentage, last season. They selected the big kicker out Utah, who along with being a big kid, has a big booming leg.He was quite successful, on long field goal attempts. He was 5th and 4th in the country, on field goals from 50+ yards and 40-49 yards respectively. I like this pick, as he was not an early reach, but could end up being a real savior for that kicking game.
Grade A
Round 6, Pick 208: Scott Miller, WR Bowling Green

The only offensive selection by Tampa Bay in the draft was a very late one. A pretty solid receiver though. Miller finished seventh nationally in receiving yards per game and 18th in receptions per game. Currently the Buccaneers, main receiving threats are Chris Godwin and of course Mike Evans. They signed journeyman Breshad Perriman in the offseason.

Round 7, Pick 215: Terry Beckner Jr., DT Missouri
It took until the final round of the draft for the Bucs to select an interior defensive lineman. Beckner played in all 26 games the past two seasons, after his previous two years being cut short by ACL tears. Beckner tackle numbers were almost identical in his last two season at Mizzou, however, his sacks numbers decreased from seven total sacks in 2017 to three and a half in 2018.
Grade C-
Check out our other Team Draft Recaps and Grades: New York Giants | Indianapolis Colts | Los Angeles Chargers | Cleveland Browns | Buffalo Bills | Carolina Panthers | Pittsburgh Steelers | Minnesota Vikings | Jacksonville Jaguars | Cincinnati Bengals | Oakland Raiders | Washington Redskins | Chicago Bears
Questions and comments?thescorecrowsports@gmail.com