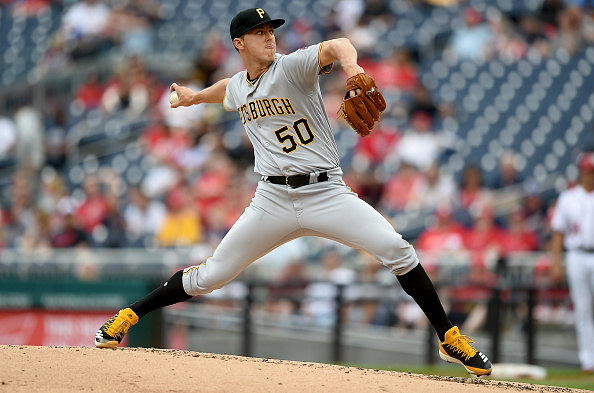 Jameson Taillon – The right-hander’s ERA is a bit inflated this season at 4.06. That’s still a decent number, and it should go down vs. the Texas Rangers tonight. Taillon’s FIP is at 3.11 which would mark a career best. His K/BB rate has been impeccable at 25/6 and he has a 1.129 WHIP. The wind will be blowing in from right field today at Globe Life Park at 14-16 mph which doesn’t bode well for the Rangers. Most of their power comes from lefties Joey Gallo, Nomar Mazara, and Rougned Odor. Taillon is pitching on six days rest today. He’s done that three times this season and has only given up five runs in 18 innings with a 12/2 K/BB rate with the extra day off.

Aaron Nola – The season started off well for Nola with a QS vs. the division rival Atlanta Braves. The next three? Not so good. Nola saw his ERA balloon to 7.45 and gave up 19 hits and 15 ERs in 13.1 innings. The last two starts have been better dropping his ERA to a still-unsightly 5.68. Nola is facing the Detroit Tigers at home which bodes well. The Tigers are last in the AL in HRs with only 20 in 27 games and are next to last in OPS at .676. They have also only scored more than four runs once in their last six.

Caleb Smith – Speaking of bad offenses, the Cleveland Indians are next to last in the AL with 26 HRs and dead last in OPS at .641. Let’s add in that they will be in an NL ballpark with the wind blowing in from left field at 17-18 mph, and they shouldn’t be expected to score much against a normal pitcher. But Caleb Smith isn’t a normal pitcher this year. He has an ERA of 2.17 and a WHIP of 0.828 while carrying a 37/7 K/BB rate over 29 innings. Give me this matchup all day long

Boston Red Sox – The top three in the lineup, Mookie Betts, Andrew Benintendi, and J.D. Martinez are a combined 15-39 with three doubles and two HRs. They also have a 4/4 BB/K ratio against Mike Fiers. Betts and Martinez are where they need to be offensively with 10 HRs and an impressive 30/36 BB/K rate. Benintendi has done well vs. righties this season as both of his HRs and SBs have come against them.

Houston Astros – The big guns of the Astros have hit Martin Perez fairly well. Jose Altuve, George Springer, Carlos Correa, and Alex Bregman are a combined 25-83 vs. the lefty with a stellar 11/13 BB/K rate. Altuve has a whopping six doubles in 36 PAs against Perez

Starling Marte – He is a cool 7-18 with two triples against Shelby Miller. He also hasn’t struck out against the righty. Besides Shelby Miller has been downright awful with a 7.52 ERA and a horrendous 18/10 BB/K rate

Eduardo Escobar – Ride the hot hand here. Escobar is 15 for his last 29 and is now batting over .300. He has four 3-hit games in the last week. He has also fared well vs. Masahiro Tanaka going 6-16 with no Ks.

Marcell Ozuna – A little contrarian here due to the fact that he is facing Max Scherzer. The St. Louis outfielder is 7-30 vs. Mad Max but five of those hits were for extra bases (3 doubles, 2 HRs). If you are looking for a guy who will probably be low-owned due to the matchup, Ozuna is your man.