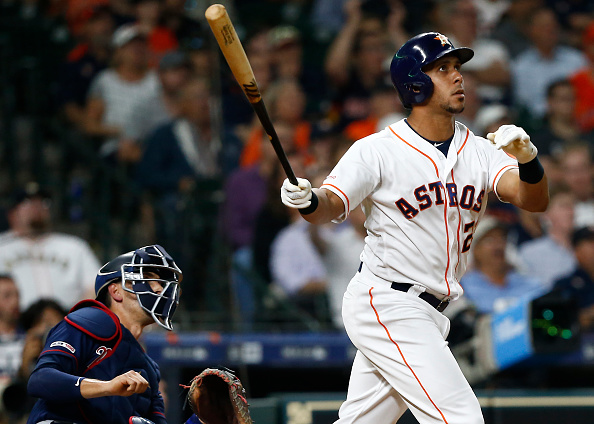 We are back at it again DFSers for our Thursday edition of Around the Horn. Hopefully, your lineups are producing a decent return early on this baseball season. Mostly night games today and that’s where our focus will be. Marlins at Phillies, Red Sox at home to the Tigers, Indians at Astros, Yankees at Angels and Mariners hosting the Rangers are favorites of mine for targeting players. Let’s take a trip Around the Horn!

Cole and Aaron Nola are my favorite pitchers for this slate. Both stud pitchers are facing lower tier lineups. Nola is up against the Marlins and Cole gets the Cleveland Indians. Because of the higher strikeout upside my lean is with Cole. Lifetime the Tribe are a minuscule 8-for-48, that’s a .167 average people, furthermore, they have an abysmal .564 team OPS. Cole is off to somewhat of a slow start but provides a safer floor in terms of strikeouts. In his starts to date, he has registered four quality starts with 44 punchouts in just 29.3 innings of work.

Moreland and the Red Sox appear to be in a good spot Thursday night as they host the Detroit Tigers. The Sox have punished starting pitcher Jordan Zimmerman to the tune of a .413 average along with a very healthy 1.244 OPS in 53 plate appearances. With a righty on the mound, Moreland should get the start at first base. Lifetime he is 5-for-9 with a 1.667 OPS off of Zimmerman.

A bit of a value play here with Beckham. He has had some good success against Sox starter Rick Porcello going 15-for-32 lifetime against the former Cy Young winner, along with a HR and six runs driven in. Beckham has a hit in six straight games with at least five DK pts in all of those games.

The Seattle Mariners will get a look at Ranger starter, lefty, Taylor Hearn. A home matchup against a southpaw should bode well for them and Ryan Healy. Healy, although not hitting for a very good average at .216 to date, does have five round-trippers along with 17 RBI. As a team, the Mariners rank second in the league with a .351 wOBA behind the Astros(.361) entering today’s action so some sort of Mariners stack is definitely in play.

Betts at $4,700 is almost a bargain. The Red Sox should have no problem scoring runs off of Zimmerman and the Tigers at Fenway tonight. Betts was a bit slow out of the gate this season but has since turned things around. Hitting in a lineup that offers him a lot of protection, the Tigers will find it tough to deal with Betts. Lifetime against Zimmerman, Betts is 3-for-4 with four RBI a homer and a couple stolen bases.

With all the injuries the Yankees are dealing with this season they continue to roll out a productive lineup. Gardner, a mainstay for the franchise for quite some time, has shown he still has some life in his bat, and a bonus, of course, is his ability to steal the odd base. At $4,200 versus righty Trevor Cahill and a less than inspiring Angels team, you could do much worse.

The Houston Astros hosting the Cleveland Indians has the makings of a great game as Geritt Cole and Trevor Bauer go head to head. Targeting Astros players versus Bauer is perhaps a tad risky but the smooth-swinging Brantley is off to a rockin’ start hitting .315 with 18 RBI and five HR. He also enters this one riding a 10 game hit streak.