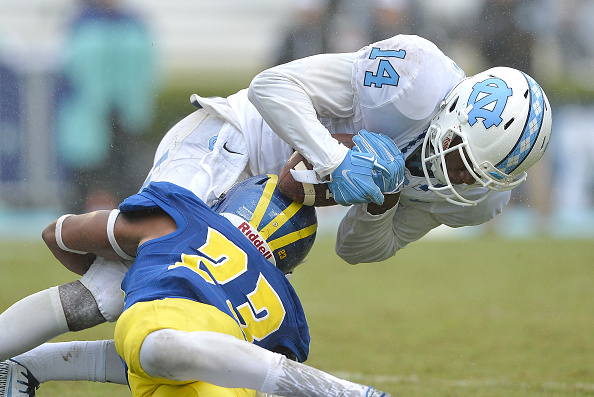 The 2019 NFL Draft is going to be happening in less than a week and all the organizations are preparing their draft plans to fill their needs. Some organizations draft really well and it helps them have good seasons while others fail to address needs that make them have to wait another year. The war rooms are going to get crazy and the player’s emotions are going to be at a high, but before that let’s take a look at one of the players.

Delaware desperately needed a win on October 6th, 2018 to keep themselves in the race for the FCS Championship Game, but they would have to travel to Richmond to try and get it. Delaware didn’t start well on offense, but Adderley made his impact felt when his teammates drove back punt returner Tyler Wilkins into his own endzone and Adderley finished him off tackling him in the endzone for a safety. While all his other teammates got easy interceptions, Adderley’s time to shine didn’t come till the 2nd Half. Richmond was down big in the second half so Joe Mancuso had to take some chances down the field and he tried to throw a pass to Deontez Thompson, but he airmailed it having the ball going off of Thompson’s hand Adderley saw this so he dived for the ball and caught it for his first interception giving the ball back to Delaware, who scored a touchdown to extend the lead on the ensuing offensive drive. Adderley didn’t stop there as right when Richmond was driving the ball in the 4th quarter Adderley came up with another interception on a pass that Mancuso tried to fit in a tight window, but he had thrown it too far with Adderley just outrunning the receiver diving for the ball to get it and it stopped a crucial drive for Richmond.

This helped Delaware survive a late comeback effort and win 43-28.

It’s hard on defense to even play one position, but Adderley has played two after starting out as a cornerback he transitioned into being a drop back safety and knowing both positions makes him versatile so he can move all over the field during the course of the game. Adderley’s speed is what helps him get to the ball fast when making tackles and does his part in limiting big plays by using the sidelines to either push opposing players out fast or out of position. Adderley controls the backend of the defense staying in the middle and helping on a receiver in terms of double covering or making sure that no one is uncovered if someone misses their assignment so he can lower the success rate of deeper completions by the opponent. When Adderley is covering a receiver he plays tight coverage not giving them any kind of space to break free. Active hands are important for defensive players because you have to react to plays fast and Adderley just knows how to put his hands up to try to pick the pass off or to bat the pass down to stop the play helping his defense get off the field sooner.

The extra aspect of Adderley’s game is that he runs back kickoffs and punts with his field vision with the ability to break them open for big gains that can result in a score so if he keeps improving he could really turn out to be like Patrick Peterson where he’s good on special teams and on defense. Adderley should easily be able to fit in any scheme so that makes him very draftable.

The FCS doesn’t get as much media attention as the FBS so players from the FCS tend to go unnoticed. Such was the case with Nasir Adderley, but a strong game at the Senior Bowl helped him gain some recognition and he was instantly put on a lot of draft radars. On the defensive side of the ball, the pass rushers are getting the most attention along with the cornerbacks so they will most likely occupy the first round and some of the second round. The safety class is loaded this year, but Nasir Adderley has distanced himself as he was first-team STATS FCS All-American with 86 tackles, four interceptions, and seven pass breakups this year.

Unfortunately for Adderley, he pulled his hamstring on Delaware’s pro day making him skip some drills at the Combine and raising new questions about his health. The injury will likely push Adderley down, but only by a little bit as he should now be the second selected safety in the draft. The Green Bay Packers will happily scoop him up and start him immediately to strengthen the back end of the secondary. The transition from the FCS to the NFL is difficult, but if Adderley puts the same amount of work in without letting the extra pressure get to him he could be a star in this league very soon.

Prediction: Nasir Adderley gets drafted in the second round by the Green Bay Packers as the 44th overall pick.