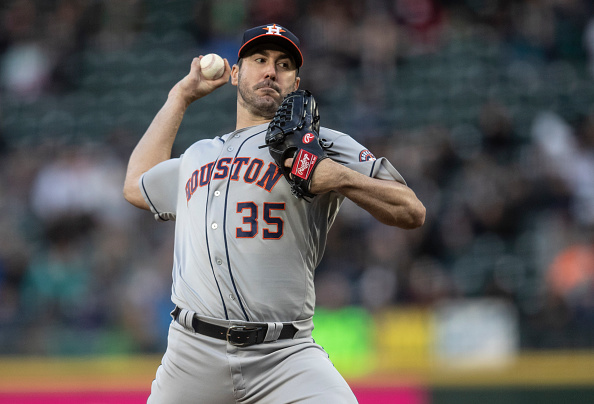 The baseball season is a grind. It’s every single day. We will approach DFS the same way and be winners at the end of the season even if we have our hot streaks and slumps. Every day there are safe bets that flop and values that hit big, but we need to stick with our strategy in evaluating and playing. I apologize for not having my season-long numbers this week. Starting next week on May 1st, I will put up my season numbers and will track them as we go along. For today though, let’s dive right in.

Justin Verlander – You really can never go wrong with the big Houston righty. He’s been his usual badass self this year going 3-0 with a 3.00 ERA and 38 Ks in 30 innings. The big bats of the Minnesota Twins do not fare well in their careers against Verlander. C.J. Cron, Eddie Rosario, Max Kepler, and Jorge Polanco are a combined 9-58 with 17 Ks and only one HR (Cron). Pay up to grab Verlander and you won’t be disappointed.

Chris Paddack – Pitching at home against the Seattle Mariners today, Paddack will look to continue his stellar rookie year. He got through six innings for the first time last week and will try to build on better efficiency. He is averaging over a K per inning and has walked only one batter in three of his four starts. Even though Seattle is a HR-hitting team, Paddack has allowed only two this year in his 20 innings and Petco should suppress some of that power.

Houston Astros – The offense has been rolling as they’ve scored 36 runs in their last five games and have a total of 51 runs in their eight home games this season. Springer, in particular, has been hot going eight for his last 23 with two bombs and a 6/4 BB/K rate. They are facing Kohl Stewart who is making his first start of 2019 for the Twins.

St. Louis Cardinals – Jhoulys Chacin has not been nearly as effective this season for the Milwaukee Brewers. He has given up five HRs in just 24.1 innings along with an unsightly 14/22 BB/K rate. Last season vs. the Cardinals Chacin pitched 25.2 innings and had an equally unsightly 12/17 BB/K rate with a 1.481 WHIP in five starts. Marcell Ozuna, Kolten Wong, and Paul Goldschmidt are a combined 17-53 with five doubles and two HRs against Chacin and have a 9/10 BB/K rate.

Charlie Blackmon – Chuck Nazty over the last week has been…well…Nasty. He’s 12-27 with a double, two triples, and two HRs. As an added bonus, whenever you get the bearded one facing a righty (Anibal Sanchez) in Coors Field, you can feel safe in rolling him out there.

Justin Smoak – While Rowdy Tellez has gotten a lot of love recently, Smoak has been doing his thing to the tune of 9-24 with three dingers the past week. He has to be licking his chops for a matchup against Drew Pomeranz as Smoak is 6-14 with an incredible 7/1 BB/K rate vs. the Giants lefty.

Michael Conforto – Conforto loves facing Vince Velasquez. He is 6-12 with three HRs against the Philly righty and has a 3/2 BB/K rate. On the flip side, Velasquez has not done well against the New York Mets. He holds a career 4.58 ERA and has surrendered six HRs in just 37.1 innings.