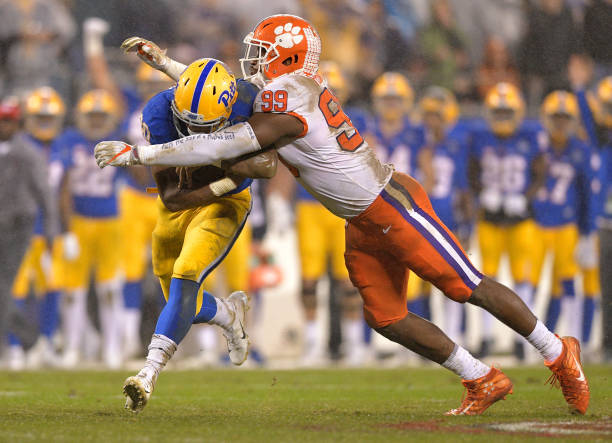 The 2019 NFL draft is just around the corner and teams are putting the finishing touches on their player evaluations. Everyone loves mock drafts so here is a seven round mock draft predicting every Seattle Seahawks’ pick. Thanks to several previous trades, the Seahawks have just four picks this year. To help with this mock draft, I used the FanSpeak on the Clock simulator.

Earlier this offseason the Seahawks used the franchise tag on edge rusher Frank Clark, guaranteeing him just over $17 million dollars for next season. Clark had a career season in 2018, finishes with 13 sacks; tied for seventh best in the league. However, there have been rumors that the Seahawks are entertaining the idea of trading him as they are struggling to come to a long term deal. Edge rusher is already a need for the Seahawks but if they trade Clark, it becomes their biggest need.

The edge rusher class this year is extremely deep and because of that, Ferrell has become an afterthought in the media. However, he is clearly a first round talent and should be a top-20 pick. During his three seasons at Clemson, Ferrell created all kinds of havoc in the backfield, registering over 50 tackles for a loss and 27 sacks. He has great length and strength and would start as a rookie, whether it’s opposite of Clark or replacing him.

Latest film room is out: Clelin Ferrell, out of Clemson, has the strength and length to be a great EDGE defender in the NFL. #NFLDrafthttps://t.co/KTMRwHGWar

If the #Seahawks wanted grab a great player at 21, Ferrell would make for a great complement to Clark.@CoachPaintCH pic.twitter.com/Fg8hiy3mpN

Over the past few seasons, the Seahawks have done a great job finding starting-caliber cornerbacks in the middle rounds. Shaquil Griffin was a third-round pick in 2017, while Tre Flowers was a fifth-round pick last year. While both guys look like long term keepers, the depth behind them is underwhelming. The Seahawks lost starting nickel cornerback Justin Coleman in free agency, making cornerback one of their more under talked about needs during the draft.

Mullen would fit the Seahawks defense very well thanks to his ability to press at the line of scrimmage and alter timing routes. He is one of the better cornerbacks in the draft at disrupting the wide receiver’s release. Mullens has loose and explosive hips which allows him to close the gap when the receiver separates. The one thing he does better than most cornerbacks in this draft class is to make an impact in the short passing game. Mullen isn’t afraid to come up and make a big hit in the flat.

Trayvon Mullen was a man possessed on this play. Quick to read the flat and explodes through the target. Goodness. pic.twitter.com/T9aRJpTnhL

Starting wide receiver Doug Baldwin struggled with injuries last season and things haven’t gotten better during the offseason. After undergoing knee and shoulder surgeries in February, Baldwin had sports hernia surgery earlier this month. While there is no expectation that he will miss the start of the season, the Seahawks have to prepare for the worse. Furthermore, Baldwin has a history of dealing with nagging injuries during the season and the depth behind him and Tyler Lockett lack difference makers. The depth at wide receiver is very deep this year and the Seahawks need to take advantage of it.

While Hall isn’t getting a lot of hype and has been labeled as a “one-trick pony” receiver but that can’t be further from the truth. While Hall’s biggest strength is his speed and ability to take the top off a defense, he can be used in all three levels, thanks to his short-area quickness and size. Hall ran a 4.39 40 time at the combine, one of the fastest at wide receiver, and with that kind of speed, cornerbacks tend to play off coverage. However, even when pressed at Missouri, Hall showed plenty of ways to get the advantage.

On my 4th game of Emanuel Hall. Has impressed me in every one. Love how varied his releases are. How about this swim to get on top of the corner and then the finish? pic.twitter.com/t6Ma7j1ShJ

Last year’s fourth-round pick Will Dissly had a hot start to his rookie year but tore his patella tendon after a few games, ending his season. Head coach Pete Carroll recently suggested that Dissly will be ready for training camp but even when healthy, Dissly is more of a blocking tight end and the Seahawks lack a threat in the passing game. Warring is a raw prospect but very athletic and plays to the whistle. After giving Russell Wilson that massive contract extension, the Seahawks need to do everything possible to put cheap weapons around him.