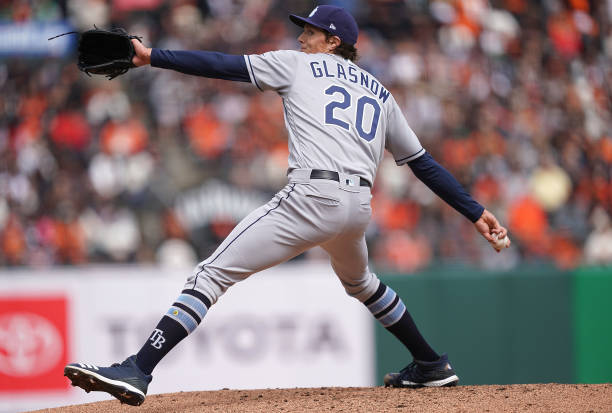 Well, hope you all had a great Jackie Robinson Day and were able to make some money last night. I hope you played Christian Yelich. I also hope you didn’t play either of the pitchers I mentioned. That might be the last time I roster Kikuchi and who knows about Cahill. Either way, the best part about MLB DFS is we get to bounce-back the next day. So, that’s exactly what we’ll do. Let’s take a look at what’s in store for tonight’s huge 13-game slate.

Glasnow seems like the real deal. Going into the season, I was high on him and so far this year, he has proven why. After three starts he is 3-0 with a 0.53 ERA and is striking out batters at a 32.8% clip. Although he’s had good breaking pitches, Glasnow has been predominantly a fastball pitcher. This season, he has cut down on the fastball and thrown his curveball twice as much. It’s a good thing because his curveball is really good. He has massive strikeout upside and will be going against one of the worst offenses in baseball, the Baltimore Orioles. Barring line movement, Baltimore has the lowest implied team run total by Vegas. Stephen Strasburg is also a safe, top dollar option, but Glasnow is safe and has more upside. The Giants make more contact than the Orioles do.

Kyle Gibson was a sleeper for many people coming into the season. One of the reasons people liked him, was his K per 9 rate. It jumped up last year and is still very close to the eight marker that it was a year ago. His off-speed pitches, especially his slider, are above average and generate a lot of whiffs. According to fangraphs, he’s actually been throwing his fastball and sinker less, by about 4%. His hard contact rate and ERA are ridiculously high to start the year. He has a HC rate of 47.1% and an ERA of 7.71. Obviously, he’s made some bad pitches, but I still think there are reasons to be optimistic. His numbers are extremely tilting and due to regress. So far, he has a BABIP of 355, a LOB% of 67.6, and a HR/FB% of 33.3. I expect all of those numbers to even themselves out as we move along this season. Going up against a hit or miss Toronto offense, I think Gibson can be serviceable. Toronto currently leads the majors, with the highest strikeout rate (28.5%). He should be able to strikeout some batters and pick up a win.

Because of the injury to Rougned Odor, the Rangers called up Santana over the weekend. Santana has only started one game but has played in two, and already has made a considerable impact. He’s 3 for 6 with 2 RBI, 2 SB, and 3 R. Monday, he was plugged into the two hole, sandwiched between Choo and Andrus in the order. He’ll be facing Jaime Barria, who was just recalled from Triple-A.

Simmons has had a slow start to the season, but he’s shown flashes of life. Mike Minor tends to struggle with right-handed batters. In 15 IP against them this season, he has allowed 3 HR and has a 40% hard contact rate. Simmons’ reasonable salary will help you load up in other areas.

Heat check. Ronald Acuna Jr. has been mashing the ball. He’s batting .302 with 5 home runs and 13 RBI in the early goings. Three of those home runs have come in the last six games and he has racked up at least 12 DraftKings points in each of those contests. Robbie Ray is a good pitcher, but this is a spot where he could get seriously tagged.

Anytime you get Mike Trout facing a lefty that struggles against righties, you pounce on it. He’s the best player in baseball. I know I’m not jumping out on a limb here, but sometimes you don’t need to be different, you need to be sure. I feel pretty good saying, Trout will have a good game tonight.

The Rangers have a big implied run total for tonight’s matchup against Jaime Barria and the Angels. Choo has been quietly hitting the ball solid with a .333 average and hit his first home run of the season last night. I think he’s a safe play in cash games and an excellent option for Rangers stacks.

I like this matchup for a few different reasons and I’m strongly considering using him in cash games. First of all, Cozart is only $3.2K on DraftKings. That is extremely good value. Also, he’s a right-handed hitter facing Minor who struggles against righties. And last but certainly not least, Cozart is 4 for 12 with 2 home runs and 3 extra base knocks against Minor.

McHugh is a good pitcher and in a good spot tonight, but that doesn’t mean we can’t attack him with a hitter that seems to have his number. Semien is 10 for 26 with a HR and 5 extra base hits versus McHugh.  Semien is also riding a 7-game hit streak and has hit two home runs during it.

The Brewers are extremely hot right now. This has nothing to do with Flaherty and everything to do with them. If you don’t have at least one lineup stacking Yelich and the brew crew tonight, you might end up on suicide watch. And nobody wants that.

The same thing as yesterday, except this time it will go off. It’s a battle of the Lopez’, as Jorge Lopez is going up against Reynaldo Lopez in Chicago. Runs should be scored in this game. If I had to lean one way or the other, I would give the edge to the White Sox, but both are in play.

Mahle has been solid his first two outings this season, which is exactly why the Dodgers could be under-owned in tournaments. The Dodgers bats have been on fire. Joc Pederson continued that with hit a walk-off home run in last nights ballgame. Mahle throws a ton of fastballs. I’m thinking the Dodgers left-handed bats can tee him up if he doesn’t mix it up more often.

The Astros can be used in all formats. Although the way pricing is working out, I’m mainly using them in tournaments. Marco Estrada is one of those weird reverse splits pitchers. He throws from the right side but struggles more against right-handed hitters than lefties. This is a spot we might be able to get an edge on the field. A lot of DFS players will blindly play left on right, right on left matchups. It doesn’t even bother me that the game is being played at the Coliseum. The Astros are the kind of team that can double and triple you to death.