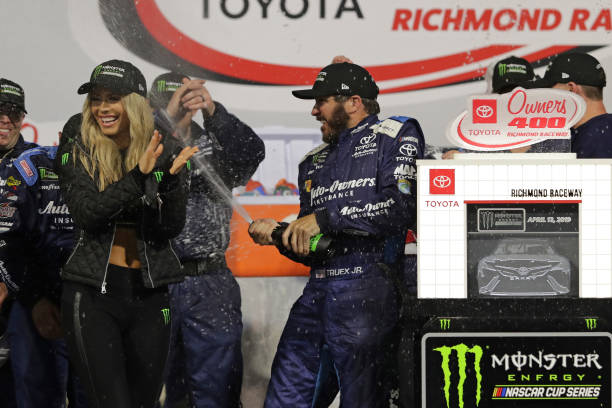 Martin Truex Jr picked up a victory for the first time at a short track in his 14 full-time seasons in the Monster Energy series, snapping an 80 race winless streak. Truex held off a strong chase down from Joey Logano over the final three laps to win Saturday night at Richmond. He had grabbed the lead with 79 laps remaining and held on from there on out, finishing with a race-high 186 laps led.

With 20 laps to go, Bowyer had moved up to the rear bumper of Truex but was having difficulty trying to complete the pass for the lead. Bowyer tagged the wall with 13 laps to go, which slowed his momentum a bit and allowed Logano to gain ground in the battle for the second position, completing the pass on Bowyer with three laps left, and continued, charging to Truex’s bumper. Logano tried to push aside Truex, but couldn’t find the chance with such a small amount of time in which to do it in.

Kyle Larson had some issues mid-race, after making contact with Daniel Hemric in Stage 2, the problems for Larson would continue to linger, and he would eventually pit and then wreck out of the race.  The Monster Energy Series takes the Easter break off next weekend, and then head out Talladega Superway in two weeks from now. Last years Talladega winner Joey Logano will be looking to add to his win total at the track, having collected 3 victories already.