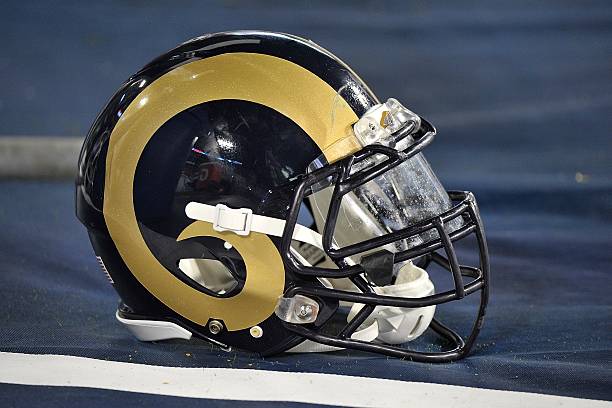 The 2019 NFL draft is less than a month away and teams are putting the finishing touches on their player evaluations. Every year we see several surprising picks that come out of nowhere like when the Seattle Seahawks drafted Rashaad Penny in the first last year. Everyone loves mock drafts so here is a seven round mock draft predicting every Los Angeles Rams’ pick. To help with this mock draft, I used the FanSpeak on the Clock simulator.

Last year’s starting center John Sullivan is currently a free agent. Maybe the Rams bring him back after the draft but even if they do, he will turn 34 years old prior to the 2019 season and a long term replacement needs to be drafted. In addition to Sullivan, former guard Rodger Saffold is now a Titan and there is a hole at left guard. Currently, 2018 third and fourth-round picks Joseph Noteboom and Brian Allen are projected to start at left guard and center, respectively. Adding an interior offensive lineman early in the draft is critical.

Bradbury has experience at left guard and center, giving the Rams more options with their offensive line. If Sullivan is re-signed, Bradbury would slide over to left guard otherwise, he will stay at center. Many consider Bradbury as the best interior offensive linemen in the draft because of his great movement skills and high football intelligence. Bradbury does a great job with reach blocking and would fit perfectly in the Rams’ blocking scheme.

NFL teams that are looking for a center, NC State has a really good one in Garrett Bradbury. Excellent reach block here on outside zone. pic.twitter.com/WuwLzmvnEF

Late last season, Todd Gurley started to wear down and later it was announced that he was dealing with a knee injury. It turns out that Gurley has knee arthritis due to his heavy workload the past few seasons. Since Sean McVay took over as the head coach in 2017, Gurley has averaged 22.7 touches per game. Towards the end of the season, the Rams signed C.J. Anderson and he played great; averaging 6.7 yards per touch. However, he signed with the Lions this offseason, leaving the Rams without a clear back up to Gurley.

Thanks to his combine performance, Sanders’ draft stock has risen. After spending a couple of seasons behind Saquon Barkley, he took over as the starter in 2018. With limited work his first two years at Penn State, Sanders enters the draft with just 308 career touches; proving he has plenty of tread left on his tires. Sanders keeps his eyes downfield and has good vision to find the correct running lane. He also does a good job creating yards after what his offensive line blocks for him and would be the perfect running back to lighten Gurley’s workload.

These are the types of runs that get me so excited about Miles Sanders as a prospect. Love that his eyes are downfield & he's processing what's happening in front of him quickly and efficiently with solid cuts. Whoever drafts him is getting a young player w/limited tread on tires pic.twitter.com/cwZgliqAfJ

When Aqib Talib was on the field, the Rams had a really good trio of cornerbacks last season. However, both Marcus Peters and Talib are free agents after the 2019 season, while Nickell Robey-Coleman is a free agent the following offseason. The depth behind those three in very underwhelming and must be addressed semi-early during the draft. Last season the Ram’s defense gave up only 13.8 pointers per game with Talib on the field, compared to 30.8 without him. Needless to say, the lack of depth at cornerback showed when Talib missed time last season.

Johnson is a bit raw as a prospect and should welcome a season as the number four cornerback as he needs to become more consistent and improve on his ball skills. Measuring in at 6’2” and 213 lbs with over 32-inch arms, Johnson fits the “long and tall” cornerback mold. He has plenty of physical talent and should develop into a starting caliber cornerback but limiting his workload as a rookie would be smart. Johnson wouldn’t make much of an impact in 2019, but in 2020 he could potentially take over as the number one cornerback.

Currently, the Rams have three defensive linemen that are free agents. The biggest name of the group, Ndamukong Suh, isn’t expected to re-sign. The Rams will need to find a replacement for him and Mack would be an excellent option at nose tackle. At 6’1” 336 lbs, Mack has the perfect big body for the nose tackle position. However, he isn’t just a run stopper, he has a good bull rush move and can push the pocket. Despite his bigger frame, Mack does a good job anticipating double teams and splitting them, making plays in the backfield.

His name is Daylon Mack. Get the hell out of the way.https://t.co/EOSYlrAiVI

The Rams re-signed Dante Fowler earlier this offseason but it was only a one-year deal. The additional of Clay Matthews is an excellent pickup but at soon to be 33 years old, there are questions on how much he has left in the tank. Crosby is a long and flexible pass rusher with an explosive first step. While he needs time to develop the rest of his game, Crosby can dip around the edge and blow things up for the opposing offense, giving him a chance to make an impact early on as a rookie.

Maxx Crosby is a baller folks. So damn explosive off the snap allows him to get this angle and then dip around the edge. Love his tape. pic.twitter.com/K5EXhBnf1A

Following the super bowl loss, left tackle Andrew Whitworth flirted with retirement but will return for the 2019 season. However, during the season he will turn 38 years old and doesn’t have much left in the tank. Sweet is raw and should be viewed as a developmental prospect but he has prototypical size and length. If given a year to work with Whitworth, Sweet could develop into his replacement and if he doesn’t, it was worth the risk with a sixth-round pick.

The Rams arguably have the best trio of wide receivers in the league with Brandin Cooks, Robert Woods and Cooper Kupp. However, Woods played 16 games last year for the first time since 2014 and Kupp is coming off a torn ACL. Josh Reynolds is a solid number four receiver but he struggled to step up when Kupp went down last season. Johnson’s strong hands allow him to make contested catches in traffic, while his ability to pluck the ball out of the air is his biggest strength and could help him make the final 53 man roster in September.