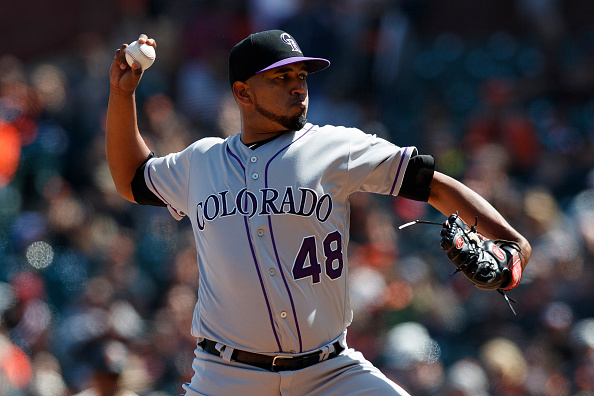 With one out in the 8th inning at Oracle Park in San Francisco, German Marquez came set and threw to the plate against Evan Longoria. Longoria hit a ground ball to the left side of the infield, and despite a diving effort from third-baseman Nolan Arenado, the ball made its way into left field, breaking up Marquez’s no-hit bid.

Despite the disappointment of losing a no-hitter with only 5 outs to go, this one hit complete game along with the 4-0 win for the Rockies could prove to be a big momentum shift in the Rockies’ efforts to climb back from their early-season slump.

Not the Start They Wanted

With a 4-12 record, the start of the season for the Colorado Rockies has been rough, to say the least. They started their 2019 campaign in South Beach against the Marlins. After winning the first two games, the Marlins took the latter two, splitting the series. The Rockies then headed North to Tampa Bay where they only won one of three against the Rays, saved by an 11th inning solo home run from Chris Iannetta. Colorado then came back to Coors Field for the home opener against the defending NL West champions, the Los Angeles Dodgers. After a much-needed win two days earlier, the team and fans had high hopes for their first home series. Hopes were crushed early. The explosive Dodgers lineup hit three home runs off Rockies pitching in a 10-6 win. Dodgers went on to sweep the three-game series. The Atlanta Braves came to town next, winning two games (third game postponed). The Rockies came out of their first home stand winless. The Rockies traveled to San Francisco, losing the first game of the series 1-0 in a pitcher’s duel between Jon Gray and Jeff Samardzija. The next day, the Rockies and Giants found themselves in the midst of an 18 inning marathon. Each team went deep into their bullpens. In the 18th inning, the Giants loaded the bases with only one out. The Rockies brought in Ian Desmond from center field to cover the entire infield. Erik Kratz hit a ground ball to the right side of the infield. Ian Desmond fielded the ball going to his left, spun, and threw the ball toward home plate. Chris Iannetta caught the ball off the bounce in time, however, his foot was off of the plate, allowing Brandon Belt to score the winning run. Only 14 hours after the final pitch, the Rockies and Dodgers faced off in the third game of the series, where 2018 Cy Young candidate, Kyle Freeland, had yet another disappointing performance. Freeland gave up three runs in his start and the Rockies dropped their eighth straight game and were on the doorstep of yet another sweep.

One bright spot from the 18 inning loss was the efficiency of the bullpen. Chad Bettis pitched five innings, allowing two runs, and from the sixth inning to the seventeenth, the Rockies didn’t give up a single run and only allowed two hits.

Even just 15 games into the season, the Rockies were desperate for a big win. In many ways, the Rockies got just what they were looking for. In the fourth and final game of the series, German Marquez took the mound and went to work. Marquez pitched 8⅓ innings of perfect baseball, setting down 22 Giants hitters in a row, with nine strikeouts. Along with the break out pitching performance of German Marquez, there were more bright spots for the Rockies on Sunday. First, the bats started to get out of bed. Trevor Story drove in his team-leading tenth RBI with a two-out double in the third inning, bringing in Nolan Arenado from first base. In the fifth inning, after more than 60 at-bats, Nolan Arenado hit his first home run of the season. There were also hits from Charlie Blackmon, Garrett Hampson, and Raimel Tapia. Hopefully, this good hitting day will carry over into the Padres series. Second, the Rockies didn’t have to use their tired bullpen. After a game two day earlier, where every bullpen pitcher for the Rockies was used, they were desperate for a day of rest. The German Marquez complete game could not have come at a better time.

The Rockies open up a two-game series against the San Diego Padres tonight at Petco Park. Antonio Senzatela will take the mound against the Padres tonight at 7:10 PT. Senzatela, who was called up from the Rockies AAA affiliate in Albuquerque, will take the spot of injured Tyler Anderson, for at least one start. This could also work in the Rockies favor. A fresh pitcher on the mound that no team has seen this year. The Padres will start Joey Lucchesi, who is 2-1 on the season with a 4.0 ERA. The Padres are on top of the NL West in the early going with a record of 11-6.

Key factors for the Rockies to bounce back from their early-season slump:

1. Kyle Freeland needs to be the ace he was last year.

3. Injured players, like David Dahl, Daniel Murphy, and Tyler Anderson have to come back and produce defensively and offensively.