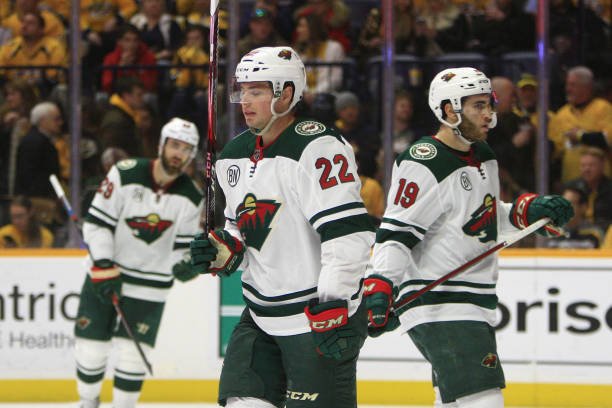 The Minnesota Wild came into this season with playoff expectations and the roster to do it. However, the Wild have now been eliminated from playoff contention and will be looking for answers this offseason. In our Season Review series, today we focus on the Minnesota Wild.

This year, as hard as it was to score this season for the Wild, there were some players who shined for them this season. This season could be known as the resurgence of Zach Parise who, despite having an injury ridden season, led the team in points with 61 points in 74 games. Eric Staal also continued his strong Wild career, even though his production did go down with 52 points in 81 games. This performance helped earn Staal a two-year extension with the Wild. Finishing off the top three players for the Wild is defensive anchor Ryan Suter, who had 47 points in 82 games, his seventh season in his fourteen-year career that he has played in 82 games.

While it may be hard for a lot of Wild fans to think of many successes for the team, one big success was the Wild had a tremendous penalty kill this year with an 81.7% penalty kill, good enough for seventh best in the NHL.

Some players also have finally emerged the way that the team hoped they would like defensemen Mathew Dumba, before his injury, and Jared Spurgeon who had a career year this season with 43 points and was able to play in all 82 games for the first time in his career. At points, it looked as though Spurgeon was one of the best offensive defensemen in the league this season. Dumba was finally starting to mold into the offensive role that the Wild thought he could be for them this season, but he injured himself during a fight against the Calgary Flames this season.

The biggest problem with the team this year was that they just couldn’t score, try as they might. The team scored 2.6 goals per game this season, which was fifth worst in the entire NHL.

Having this low of a ratio just doesn’t cut it in a scoring driven league. The aforementioned injury to Dumba hurt as well, but the team in general struggled with injuries this season. Team captain Mikko Koivu suffered an injury late in the season and he missed the rest of the regular season, and trade deadline acquisition Victor Rask was injured ten games into his Wild career.

Some of the trades that first-year general manager Paul Fenton made have worked out wonderfully for the Wild, such as acquiring center Ryan Donato from the Boston Bruins at the trade deadline who brought an offensive spark to the team scoring sixteen points in his 22 games in a Wild jersey this season, and, surprising all Wild fans, defenseman Brad Hunt who brought a solid depth defenseman presence that the Wild hadn’t had this year. However, some have blown up in the team’s face and badly like the trade of Nino Niederreiter. After trading Niederreiter to the Carolina Hurricanes, he found the scoring touch he missed this year for the Wild, scoring 30 points in 36 games for the Canes and now finds himself in the playoffs. Victor Rask, the piece that came back to the Wild in the deal, had a rough time adjusting to the Wild as he only scored an abysmal three points in 23 games.

What Next Year Holds

During the end of the year press conference the team held, Fenton maintained that there will be no coaching change and that his coach will still be Bruce Boudreau. Fenton also said that he plans on not spending in free agency purely for the purpose of spending, but looks to improve the offense. This offseason could be crucial for the Wild as they are in quite a predicament with their salary cap. This year also ended the seven-year streak of the Wild in the playoffs, and it will be interesting to see what moves are made in the offseason.