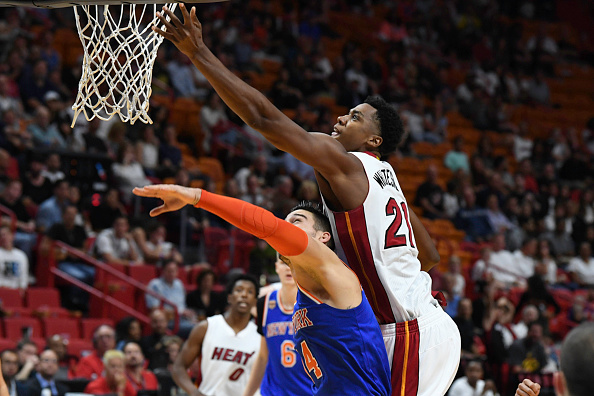 In a couple of months from now, Miami Heat center Hassan Whiteside could become a free agent if he opts out of the final year of the four-year contract he signed back in 2016. However, he’s unlikely to earn as much as his $27 million option for next season. While he hasn’t guaranteed he will opt out, Whiteside still plans on giving the decision some thought in the coming weeks.

“I’m definitely going to weigh my options,” Whiteside said, via Miami Heat Herald’s Barry Jackson. “It’s definitely a decision I got to make and do the best for me. I feel like if I’m playing, I’m going to produce so it will take care of itself.”

Since returning from his hip injury a couple of months ago, Whiteside has been replaced by Bam Adebayo as the Heat’s starting center. He’s also seen his playing time dip to just 23.3 minutes per game in 2018/19, his lowest mark since joining the Heat in 2014. In the past 19 games as a reserve, Whiteside’s minutes dipped even further to 17.3 per game. And while the Heat center hasn’t publicly complained about his role, he believes he is capable of playing even more minutes.

“I don’t think I’m a 20-minute guy,” Whiteside said, per Jackson. “I average what, 20 minutes? So I think I can play more and I can do more. So I definitely think what I bring to the game is at a high level for my position. You know, I led the league in categories that you would want a big man to lead the league in. I feel like I can keep doing that.”

Should Whiteside decide to opt out, which remains unlikely, it would remove $27 million from the Heat’s salary cap for 2019/20. But it wouldn’t be enough to land a top-tier free agent this summer unless Heat point guard Goran Dragic also declines his $19 million player option for next season.