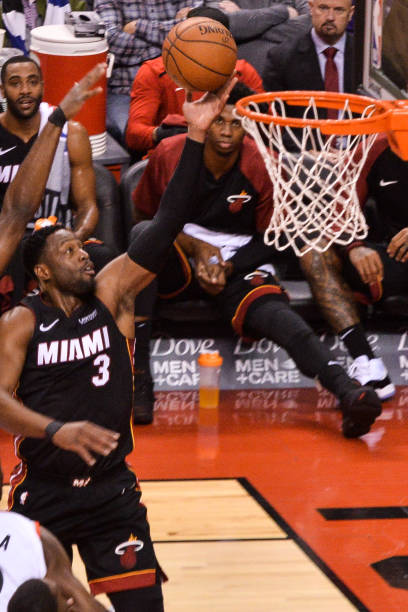 Here are my four takeaways from Tuesday’s 122-99 victory over the Philadelphia 76ers.

With the Detroit Pistons win over the Memphis Grizzlies, the Heat are officially eliminated from playoff contention. Prior to Tuesday night’s games, the Heat needed two wins, two Pistons losses, and at least one Hornets loss to make the playoffs. For a while, there was hope, with the Grizzlies racing to an early 22 point. And then all hope was lost, with the Pistons outscoring the Grizzlies 39-14 in the fourth quarter to grab the win.

Now, the Heat’s last game of the season will end in Brooklyn. It will also be Dwyane Wade‘s last NBA game.

Tuesday marked Dwyane Wade’s first start in a Heat uniform since Game 7 of its second-round series against the Raptors in 2016. In what was an emotional night, Wade put on a show for the packed arena. The 37-year-old opened the game with an uncontested dunk and went on to score 14 points in the first half. He also scored 16 points in the second half.

https://twitter.com/MiamiHEAT/status/1115794801138577408
There was a memorable moment late in the game when Wade and his longtime teammate Udonis Haslem both checked in the game. They spent the rest of the night trading shots. Haslem closed with seven points.

Justise Winslow also had himself a night from three-point range. Winslow was 4 of 5 on 3-pointers through the first two periods, leading the Heat with 14 points at the half.

Winslow’s really worked on his three-point shooting this season. Before this season, he was shooting just 25.8 percent. Now that he’s added it to his game, he’s become a much better player.  With Tyler Johnson and Wayne Ellington gone, the Heat are going to need more of that next season.

Heat out of Luxury Tax

With the Los Angeles Clippers claiming Rodney McGruder on Tuesday, the Heat avoids paying the luxury tax this season, saving $5 million. McGruder is ineligible to play in the playoffs because he wasn’t waived by the March 1 buyout deadline, so this is a move made with an eye towards the future. They now hold the soon to be free agent’s bird rights and they will have until June 29th to submit a qualifying offer.

Next up: The Brooklyn Nets tonight at 8pm ET