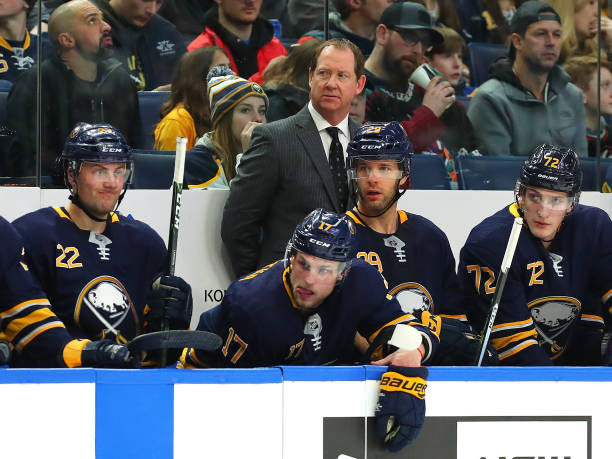 After the Florida Panthers fired their head coach, the Buffalo Sabres followed suit as the team announced that head coach Phil Housley yesterday. In Housley’s two years in Buffalo, the Sabres have a combined record of 58-84-22.

Housley is a very familiar name to Sabres fans as one of the greatest to ever don the Sabres jersey, and one of the greatest American born players to ever play the game. The Minnesota native was the sixth overall pick by the Sabres in the 1982 NHL Draft and held the record for most points by an American born player until Mike Modano broke that record. In his eight years as a player in Buffalo, Housley scored an astounding 558 points. For his career, the Hall of Fame defenseman had 1,232 points. Besides his time with the Sabres, Housley played for the Calgary Flames for five years, the Winnipeg Jets for three years, the Washington Capitals and Chicago Blackhawks for two years, and the St. Louis Blues, New Jersey Devils, and Toronto Maple Leafs for one year.

His coaching career unfortunately in the NHL has come to a halt for now. At a press conference held Sunday afternoon by the Sabres, general manager Jason Botterill said, “Today was not an easy day, but the results in the second half were just not there”. And Botterill is absolutely right. In the second half, after at one point being in control of one of the playoff spots in the Atlantic Division, the Sabres won just nine games after the All-Star Break and came limping into March with a wounded record in the process. Botterill also said that he consulted with the ownership group of the Sabres on this decision and they accepted it. Botterill did not comment much on the current candidates that the team is looking into but did say that a search had begun. With a young core and being a team on the rise in the NHL, the Buffalo Sabres job may be the most coveted coaching job this offseason.