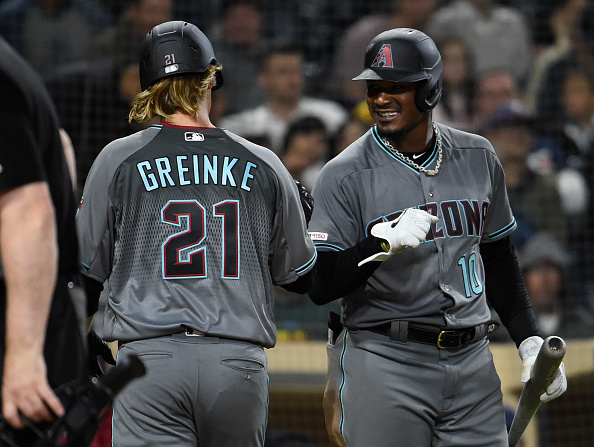 The Arizona Diamondbacks needed to bounce back after a rough series vs. the Los Angeles Dodgers and they did just that.

They took two out of three in San Diego, they had the chance for a sweep but couldn’t complete it in the finale. In Game one it was a complete team effort for the Dbacks with a dominating offense and pitching performance led by the debuts of Merrill Kelly and Jon Duplantier as they won 10-3. In Game two the offense didn’t slow down as they scored eight runs led by Zack Greinke who smashed two home runs. In Game three the offense was quiet only putting up only one run and Robbie Ray struggled with command in the 5th and 6th and was run out of the game.

Peralta doesn’t seem to be slowing down he had another fantastic series vs the Padres. He was 8-13 in the series hitting six doubles and had one RBI.

Jones also continued his hot streak in his hometown of San Diego going 5-14 in the series and leading off game one with a HR.

Marte had a great series after starting off slow in LA, he went 6-14 with a HR, a double and two RBIs.

Duplantier another pitcher making his MLB debut. The Dbacks top prospect came in relief and threw 3 IP giving up only one hit and had two Ks. It was Duplantier’s first career save.

Escobar had another rough series in SD as he went 1-14 with 4 Ks.

Chafin was brought in relief of Zack Greinke in game two and he struggled. Chafin gave up two hits including a HR, a BB, and two ER.

The Diamondbacks finally head home after a seven-game road trip. The Dbacks will host the defending WS Champs Boston Red Sox in a three-game set.