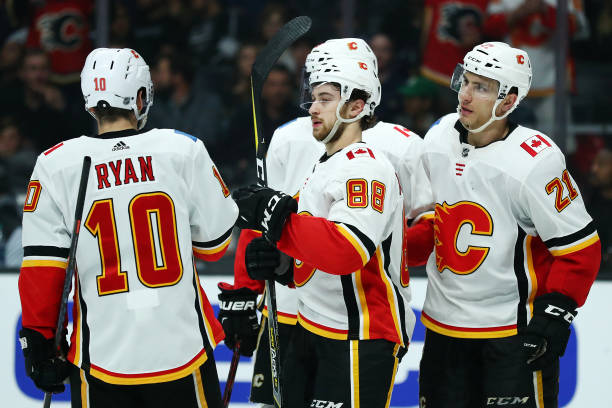 In a game where both the Flames and Sharks were still battling for the division crown, the Flames struck the decisive blow, earning the 5-3 victory over the San Jose Sharks on Sunday night. This is the first division title for Calgary in 13 years, and the first Conference title since 1989.

Timo Meier opened the scoring for San Jose almost 9 minutes in the first period. However, the Flames would return the favor, late in the first period, scoring three times in less than two minutes, including a goal each from Sean Monahan, and Mark Jankowski. It was a complete team effort for Calgary, with 5 players in total chipping in with goals, Michael Frolik and Mikael Backlund would round out the scoring for Calgary as they would each contribute goals in the second and third periods. Logan Couture and Kevin LeBlanc had the other two goals for the Sharks.

Flames goaltender Mike Smith did not have an overly busy night, stopping 12 of 15 shots, the lowest shot total by San Jose all season. Calgary was able to control the game pretty much after that opening goal, only allowing the Sharks to put up nine shots in the first couple of periods. Aaron Dell took the loss for San Jose, stopping 23 of 28 shots. Dell’s record dropped to 9-8-4 with a 3.23 GAA and a .884 save percentage, he’s been ravaged in his last 3 games, giving up 16 goals.

San Jose has officially clinched second in the Pacific and will meet the Vegas Golden Knights in the opening round. The Sharks topped the Golden Knights in a hard fought 4-3 overtime win, on Saturday night, snapping their 7 game losing streak. Calgary at the moment would be facing the Colorado Avalanche in the first round of the playoffs, but with the Coyotes just a couple points behind the Avalanche for the second wild-card spot, their opponent is still very much up in the air.