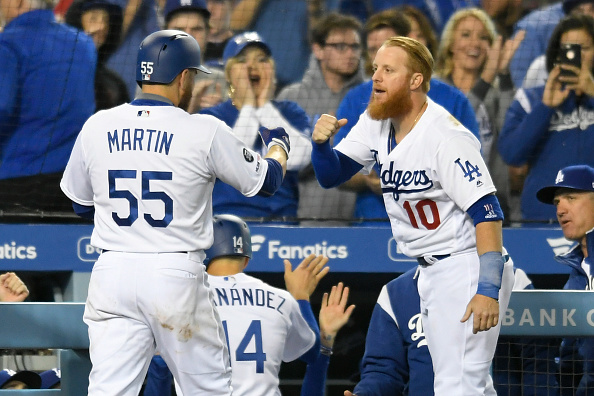 The Los Angeles Dodgers went 3-1 against the Arizona Diamondbacks, as I predicted, in their first series of the season. Now they take on their division rivals, the San Francisco Giants.

Recap of the first series

The first game featured Hyun-Jin Ryu vs. Zack Greinke. Dodgers were able to get 4 home-runs against Greinke in just 4 innings. They went on to hit a total of 8 home-runs, setting an MLB record for most homers on Opening Day.

The third game featured Kenta Maeda vs. Zack Godley. The Dodgers were able to bounce back in this game and then some. They could not stop scoring. In the 8th inning, they scored 7 runs. The Diamondbacks brought in John Ryan Murphy to pitch in the 7th and 8th inning. In the 8th, Dodgers put the finishing touches on the game. Austin Barnes hit a two-run home run, followed by a Justin Turner RBI, leading to a Cody Bellinger two-run home-run. Dodgers won the game 18-5.

The finale of the series featured Walker Buehler vs. Luke Weaver. Weaver dug himself a hole to begin the game, giving up 3-runs in the first inning, 4 runs in 3 innings. Then, the Diamondbacks struck back, scoring 7-runs in the 4th inning. It was unlikely to see Buehler struggle the way he did on Sunday, Pedro Baez made the matter even worse by giving up a 3-run homer. Dodgers were able to score a run in the 4th inning to make the game 7-5, Diamondbacks lead. In the 8th inning,  the Dodgers rallied back, scoring 3-runs. A.J. Pollock came up clutch, getting two runs in, then Max Muncy drove in A.J. Pollock, and the Dodgers regained the lead, 8-7. They went on to win the finale and the series 3-1.

Battle with the Giants

On Monday, the San Francisco Giants will face off against the Dodgers in Los Angeles. The Dodgers are 3-1, the Giants are 1-3, after the Opening Series of the season.

The first game will feature Julio Urias vs. Drew Pomeranz. Julio Urias had an excellent Spring training. He pitched in 6 games, starting in 5, finishing with a record of 2-0, with a 1.72 earned run average. Pomeranz appeared in 5 games during Spring training, started in 3 games, Pomeranz went 2-1, with an ERA of 2.81. The Dodgers will be able to score enough runs to win on Monday night because I think Julio Urias will dominate and lead the Dodgers to a win.

The second game will feature Hyun-jin Ryu vs. Madison Bumgarner. Hyun-jin Ryu had a solid outing against the Diamondbacks in Opening Day. Ryu finished the game with a 1.50 ERA. As for Bumgarner, he pitched Opening Day against the Padres, finishing the game with a 2.57 ERA. If the Giants win in this series, it will be this game. But, I don’t think they will. Ryu dominates at home, Justin Turner, A.J. Pollock, Kiké Hernandez, and Russell Martin tend to hit better against left-handed pitchers, as Cody Bellinger and Corey Seager, they could hit or two against Bumgarner as well, meaning, the Dodgers have a good chance of winning this game.

The third game will feature Ross Stripling vs. Derek Holland. Ross Stripling did a good job against the Diamondbacks, pitching 5 1/3 scoreless innings. Derek Holland struggled in Spring training, pitching in 5 games, starting in 4 of the 5 games, finishing with a record of 0-0 and an ERA of 5.06. He gave up 3-runs against the Padres in 4 innings pitched as well. The Dodgers bats will stay hot, and they will get off to a fast start against Derek Holland, leading to a win.

The Dodgers should be able to sweep the Giants and improve their record to 6-1. As for the Giants, they will fall to 1-6. It’s good to see the Dodgers getting more runs to start the season compared to the start of last season. Dodgers combined for 42 runs in just 4 games. This is a positive going forward for LA.