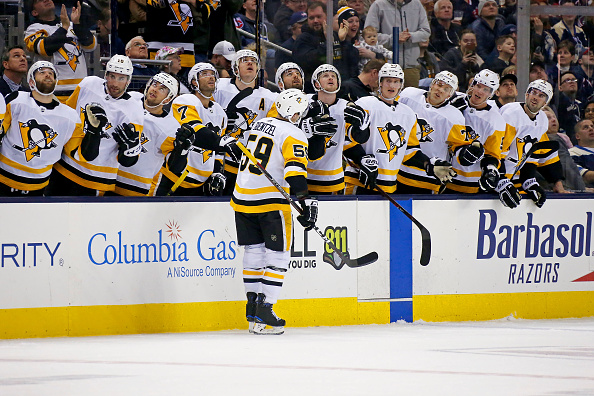 With the Pittsburgh Penguins facing off against the Dallas Stars last night we saw everything from short-handed goals, power-play goals, drama, and breathtaking saves.

In the first period, we saw the stars take it to the Penguins for most of the period. Murray made some key saves throughout the period doing his best brick wall impersonation stopping all 10 shots in the period. After 15:25 in the first the Penguins get the first goal by Jake Guentzel on an incredible rebound shot on the power-play. The period would end with the Penguins up 1-0 leading not only in the goal category but the shot category 12-10.

The start of the second period we saw Dallas come out buzzing. 36 seconds into the period we saw Radek Faksa shoot wide of the net with a grade A opportunity. Not long after that, we saw Tyler Seguin tie the game up with a yawning net a minute and three seconds into the 2nd. Fast forward to 14:41 into the second McCann gets his first goal of the night with a beautiful forecheck from Phil Kessel, and he dishes it to McCann, and he buries it in the back of the net. The celebration didn’t last long at 18:40 in the period as Andrew Cogliano buries it and ties the game up going into the third the score 2-2.

Now the Penguins record going into the 3rd tied is not so good, and it’s even worse on the road (4-5-6 overall, 0-3-5 on the road.) We saw both the Stars and Penguins trade chances left and right until Jack Johnson takes a holding penalty 3:34 seconds into the game. While on the penalty kill Penguins forward Teddy Blueger chops the puck to center ice picks it up passes to McCann, and we saw one of the most beautiful Spin-o-Rama goals of the season at 4:20 in the 3rd. That goal marked McCann’s 4th short-handed goal of the season, and most importantly it put the Penguins up 3-2.

We saw the Stars push back fiercely with Murray making two remarkable saves the best being the breakaway save on Alexander Radulov with 8:35 left in the game. As time ticked down every Penguin fan had the past three games in the back of their head. Within 3 minutes the past three games the Penguins have blown one-goal leads in each of them. Their suspicions were raised even more. With a minute and 20 seconds left in the game, Bryan Rust commits a holding infraction. We then saw the Stars like every other power-play tonight fail to connect (0-3 the entire night.) With this win, the Penguins move to 41-24-11 and are stay 3rd in the Metropolitan Division.

All in all, this was a fast-paced game, and it sure raised my blood pressure a couple of times. At the end of the day, the Penguins look to be back on track and seem to be hitting their stride. And like Hall of Fame announcer Mike Lange says “LADIES AND GENTLEMAN ELVIS HAS JUST LEFT THE BUILDING!!!