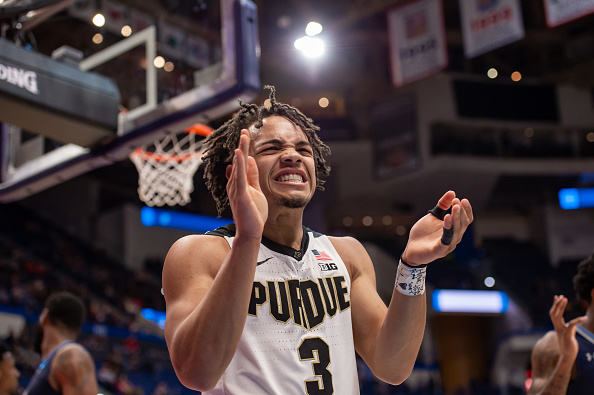 The first round of the NCAA Tournament is the books, and we’re on to the Round of 32. We look at the final eight teams left in the South. Here are the matchups and some players who showed they can play on the big stage.

With the round of 32, the Oklahoma Sooners now go from having faced the 155th ranked defense to face the number 1 overall in the country, this match will no doubt be a much different animal for the Sooners. They’ll need the trio of Doolittle, Brady Manek, and Christian James, to try and break down that Cavs defensive fortress, a very tough task indeed. The Sooners are solid enough on the boards, with a tough interior game, but also they don’t make a lot of silly mistakes, which they can’t afford to do.

Now that the Cavaliers, have gotten the first round monkey off their back, they can perhaps play up to there potential. Since Oklahoma aren’t known for taking a lot of threes, averaging 6.6 attempts, Virginia will look to shut down that part of the Sooners game. The team won’t force a lot of sloppy mistakes, ranked second best in the country in turnovers per game. With both clubs, being strong defensively, and neither being relatively scary on offense, this has the makings of a grind them out low scoring affair.

The defending National Champion Villanova Wildcats take the floor with the Purdue Boilermakers in the Field of 32. They’ll be relying on the combo of Phil Booth and Eric Paschall to carry the bulk of the offensive load, Paschall and Booth both played in Villanova’s last meeting with Purdue, a 79-76 win over the Boilermakers on Nov. 14, 2016. The x-factor for them could be Collin Gillespie, can he come through with a strong game, if so that could be a huge help, Gillespie has not posted over ten points in his last three contests.

For Purdue, it all rides on Carsen Edwards’ back. Quite frankly if his shots aren’t falling, it could be a long night for the Boilermakers. They average 9.7 threes a night while shooting 36.2 percent from beyond the arc. Purdue is hitting in on 73 percent of their attempts at the free throw line. It’s going to be all hands on deck in order for them to pick up the win and get themselves to the Sweet Sixteen, Villanova isn’t going to give up their title defense, without a fight.

The Anteaters will ride a 17-game winning streak into Sunday’s game against the Ducks. Even though they’re a 13-seed, that ranking you could argue is quite deceiving. Their true strength is on the glass, ranking ninth in the nation in rebounding margin, Jonathan Galloway is tops on the team with 8.0 rebounds per game. If they are expected to knock off Oregon, they need to try sticking to their bread and butter. The Ducks are vulnerable when they’re outmatched on the boards.

Oregon can earn a major advantage by winning the turnover battle, ranked 89th in opponent turnover’s per game, which is a stark contrast to UC Irvine which is good for 304th in the country. Oregon is a dangerous team at the moment, their athletic, deep and have great chemistry. If they can trap Irvine into their defensive pressure, that would go along way, they are ranked 15th overall in points allowed per game.

These two teams have recently played each other in the NCAA Tournament. The two squads were matched up in one of the “First Four” play-in games of the 2014 tournament, the Vols defeat the Hawkeyes 78-65 in overtime. If Iowa is going to pull the upset and get themselves to the Sweet Sixteen, it’s going to need to be equally good at the offensive end, and defense.

However that is going to be a very tough ask, given defensively, Iowa is giving up 74 points per game, which puts them 245th in the country. As they’re facing a Volunteers club that is one of the best as far as offensive skill goes, ranked 20th overall with an average of 82 points a game. I wouldn’t be surprised to see the Iowa defense get carved up on Sunday. The Volunteers aren’t half bad on Defense either, which is a distinct difference from the Hawkeyes.